Nationals 6, Cubs 1: Max Scherzer allowed one run over six innings, striking out six. Four of the Nats runs came via a couple of infield singles and a couple of Cubs throwing errors. The other two came via a Michael Taylor RBI double. The Nationals stole seven bases off of Miguel Montero and Jake Arrieta, four coming from Trea Turner. After the game, Montero wanted everyone to know that it wasn’t his fault, it was Arrieta’s:

“The reason why they were running left and right today because they know he was slow to the plate,” a visibly frustrated Montero said. “It really sucked because the stolen bases go to me, and when you really look at it, the pitcher doesn’t give me any time.” 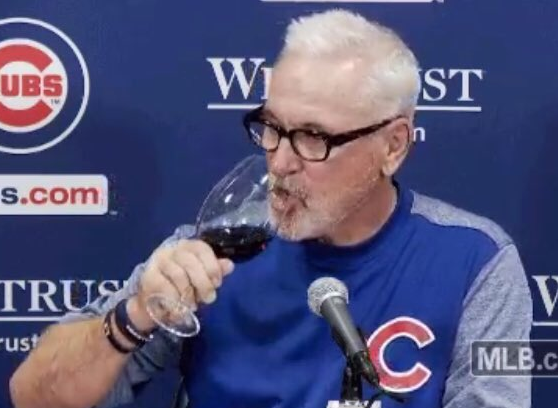 Rangers 2, Indians 1: Adrian Beltre hit his 450th homer. And he did it at a wonderful time: in the ninth inning of a tie game, giving his team the win. The homer was his 2,969th career hit. Which is nice.

Orioles 3, Blue Jays 1: Kevin Gausman and three relievers held the Jays to a lone run. Which, once you adjust for this being the Orioles, is the equivalent of any other team holding the opposition to, like, negative eight runs. Mark Trumbo doubled in two, Adam Jones singled in one. A ninth inning solo homer from Troy Tulowitzki was the only damage the Jays did all night.

Tigers 5, Royals 3: Miguel Cabrera and J.D. Martinez each homered, helping the Tigers overcome an early 3-0 deficit. Justin Verlander allowed three over seven and the bullpen tossed two shutout innings. Which, once you adjust for this being the Tigers, is the equivalent of any other team’s bullpen shutting out the opposition for, like, eleven innings.

Phillies 8, Mariners 2: Maikel Franco and Arron Altherr homered for the Phillies, who overcame a 2-0 deficit. Which, once you adjust for this being the Phillies, is the equivalent of any other team overcoming, like, a six-run deficit. Aaron Nola allowed two runs over seven and struck out nine.

Red Sox 9, Twins 2: Most pitchers will not come back after a rain delay of more than an hour or so. Here Drew Pomeranz waited out a 76-minute rain delay in the second inning and stayed in the game to deliver five solid innings, backed by homers from Christian Vázquez and Chris Young In his last seven starts, Pomeranz is 4-1 with a 2.70 ERA, 44 strikeouts and 9 walks in 40 innings. The Red Sox reclaime sole possession of first place in the AL East.

Rays 4, Pirates 2: avid Freese misplayed a groundball at third base in the top of the 10th inning, allowing Steven Souza to score and giving the Rays the win. An Adeiny Hechavarria sac fly added an insurance run. Hechavarria also singled in a run in the eighth. Not a bad first day on the job for the newest Ray.

Reds 8, Brewers 6: The Redlegs were homer happy with Joey Votto hitting a tiebreaking two-run homer in the fifth and Billy Hamilton, Adam Duvall and Eugenio Suarez all going deep as well. Travis Shaw hit a three-run shot in a losing cause. The Brewers have lost three of four but continue to hold a one-game lead in the NL Central.

Marlins 6, Mets 3: Mets starter Robert Gsellman left the game after straining his hamstring while trying to beat out a grounder in the fourth inning and will now likely be the sixth Mets starter to hit the DL this year. DH uber alles. He also allowed three runs in three innings, but the Mets came back to tie it with a Travis d’Arnaud homer in the seventh. A pinch-hitting Ichiro singled in J.T. Realmuto in the bottom half of the seventh, however, and Christian Yelich singled in two more in later that inning to pad the Marlins’ lead.

White Sox 4, Yankees 3: The Yankees’ bullpen imploded once again. Leading 3-1 in the eighth, Domingo German and Tyler Clippard combined to issue four walks to allow the White Sox to get within one. In the ninth, Dellin Betances walked two guys and hit a batter before Jose Abreu smacked a walkoff single. Abreu also had an RBI double in the third. The White Sox snap a four-game losing streak.

Athletics 6, Astros 4: Ryon Healy hit a a grand slam in the sixth and Khris Davis scored one run and doubled in another. Sean Manaea was solid into the sixth, holding the mighty Astros lineup to one run. That grand slam gave the A’s needed room to absorb George Springer‘s ninth inning three-run shot.

Diamondbacks 6, Cardinals 5: The Cardinals bullpen blew this one. Leading 5-2 in the eighth, Trevor Rosenthal surrendered an RBI single to Daniel Descalso and a sac fly to Chris Herrmann to allow the Dbacks to get within one. In the ninth, Seung-Hwan Oh gave up a solo homer to David Peralta to force extras. Herrmann struck again in the tent, knocking in Reymond Fuentes with a game-ending RBI single off of Matt Bowman.

Dodgers 4, Angels 0: Kenta Maeda tossed seven shutout innings and the Dodgers scored all four of their runs in the six via a Cody Bellinger RBI single and a Joc Pederson three-run blast. This one was over in a crisp two-hours, thirty minutes. Some kook wrote a column the other day in the Wall Street Journal saying weeknight baseball games should be seven innings. If that was the case here fans could’ve kept their engines running while they watched the game and popped right back out.

Braves 3, Padres 0: Rookie Sean Newcomb shut out the Padres for six innings, striking out eight, to pick up his first career win. He’s only allowed four earned runs in 24.1 innings over four starts, so he probably deserves to have more than the one win. Padres manager Andy Green thinks Newcomb maybe didn’t deserve his eight strikeouts here:

“That was the largest strike zone I have seen against our guys behind home plate. Newcomb threw the ball very well. But Tyler Flowers is the player of the game in my mind. He is snatching balls above the zone, below the zone, and bringing them back in and getting a strike on all of them.”

Miguel Montero agrees, it was someone else’s fault. Atlanta has won eight of ten.

Giants 4, Rockies 3: This one went late but Denard Span finally sent everyone home with a walkoff RBI single in the bottom of the fourteenth inning to give the Giants the win. Kelby Tomlinson forced extras with an RBI single in the eighth inning. The Rockies are reeling, losers of seven straight. They were in first place entering play a week ago today. Now they’re in third, five and a half back of the Dodgers. So much for that early season feel good story.