Last week Yonder Alonso of the A’s led the AL All-Star voting at first base. This week he’s been passed up by Eric Hosmer of the red-hot Royals, 936,734 votes to 887,645. If Hosmer holds on it will be his second straight selection by the fans at first base.

Elsewhere, Salvador Perez of the Royals leads at catcher, Jose Altuve of the Astros leads things at second base, his teammate Carlos Correa tops shortstops, Miguel Sano of the Twins commands the top spot at the hot corder (1,302,090); and Nelson Cruz of the Mariners leads all others at DH. In the outfield, it’s Aaron Judge of the Yankees, who remains the top overall vote getter then Mike Trout of the Angels and George Springer of the Astros.

Here are all the vote totals: 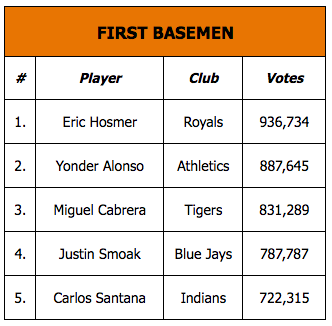 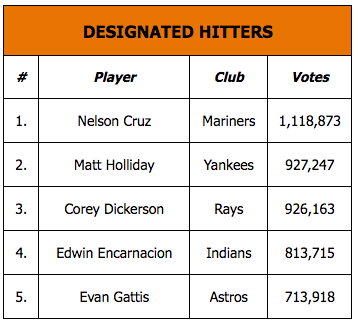