The latest balloting is in for the NL All-Star team and the race to start at first base remains tight.

Nationals first baseman Ryan Zimmerman has 1,404,251 votes and remains slightly ahead of Chicago’s Anthony Rizzo, who has 1,247,219. Zimmerman is batting .349 on the season with 19 home runs and 54 RBI. If he holds on, this would be Zimmerman’s first ever elected start at first base. Rizzo was the starter in 2016.

Here are all of the top vote getters: 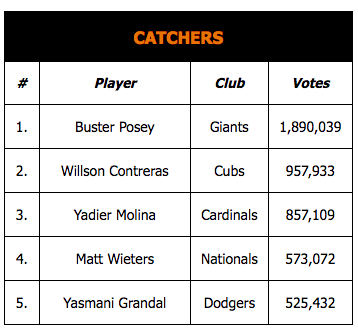