Mets 9, Cubs 4: A five-run eighth inning, kicked off by Curtis Granderson‘s 300th career homer and extended by Lucas Duda‘s three-run blast put the Mets ahead comfortably. Neil Walker left the game with hamstring injury as he ran down the line. That’s a blow for the Mets, as he’s been en fuego of late, batting .321 with 23 RBI, 7 HR, 9 doubles & 26 runs scored over his previous 36 games. Also: Kyle Schwarber hit a moon shot homer.

Diamondbacks 2, Tigers 1: Jordan Zimmermann pitched his best game of the year (8 IP, 6 H, 2 ER) but it didn’t matter because Taijuan Walker, Randall Delgado and Fernando Rodney combined to pitch a better one. The two runs scored by the Dbacks in the first inning held up. I watched this game and, as it unfolded, my belief that Zimmermann looks like the well-meaning dad in a TV movie was solidified. The one who doesn’t see eye-to-eye with his teenage daughter and whose misunderstanding of her leads to a lot of drama in the middle section, but who toward the end, when some sort of teenage crisis emerges, shows that he’s always there for her, despite their differences. He’s a good man, and his daughter comes to realize it too: 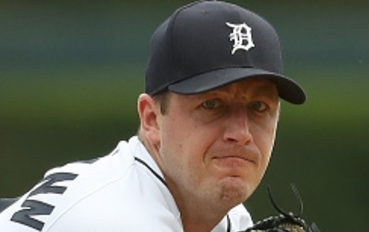 “Heather, I know the dance is important to you, but there are REASONS your mother and I are not letting you go.”

Blue Jays 7, Rays 6: Kendrys Morales drove in four via a three-run homer and a fielder’s choice, but it took an eighth inning Russell Martin homer for the Jays to win after they coughed up a lead. Also, this came from the AP game story, as it stood at 6am this morning:

Obviously it’s Francisco, not Nelson, who hasn’t played since 1998. But I don’t offer this as mockery. Any of you who have been reading this feature for any length of time know that I routinely sub in the first name of long-retired players when a current player has the same last name. Carlos Quintana for Jose, etc. I am TERRIBLE about that. Whoever this AP writer is has my sympathy and thanks for making me not feel so alone in this old man habit.

Braves 13, Nationals 2: Brandon Phillips had four hits and three RBI and Julio Teheran had a strong outing as the Braves takes two of three from the Nats. How did you pitch so well against a tough team, Julio?

“I just have to stay focused and execute pitches,” Teheran said. “That’s something I was doing really good — getting ahead in counts and throwing strike one. It was big today.”

Royals 7, Giants 2: Mike Moustakas, Jorge Bonifacio and Lorenzo Cain all homered as the Royals win both in a two-game series. Two-game series are dumb, by the way, but getting only two games in one of the best road cities in the country seems like a super big ripoff for the Royals. They just had three in San Diego and now get four in L.A. so that’s OK, but I’d want more than two days in San Francisco.

Marlins 11, Athletics 6: The A’s took an early 4-0 lead, but then Marcel Ozuna and Tyler Moore hit second inning homers and the comeback began. Ozuna’s third inning groundout RBI tied things up and Dee Gordon‘s RBI single in the fourth put the fish ahead for good. Ozuna knocked in three, Gordon and Christian Yelich knocked in two a piece.

Angels 7, Yankees 5: Leads of 4-0 weren’t very safe yesterday. The Yankees leapt out to that score in the first inning, but the bad Michael Pineda showed up in Anaheim last night, allowing five runs on ten hits in six innings. Andrelton Simmons‘ two-run homer in the seventh gave the Angels the winning margin, but credit to Parker Bridwell and Blake Parker — the Parkers — for picking up a shaky Matt Shoemaker and tossing five innings of one-run ball in middle relief.

Brewers 7, Cardinals 6: Milwaukee mounted an early 6-0 lead. That proved safe, even if the Cards made it close. Three of those early runs came off the bat of Eric Thames, who hit a two-run homer and doubled in a run. And yes, I have written “Marcus Thames” a good half dozen times this year, though I don’t think any have made it to the final post yet.

Astros 13, Rangers 2: Top prospect Derek Fisher got called up yesterday and he didn’t take long to make a good first impression. Fisher homered and had an RBI single in the Astros’ nine-run sixth inning. Factoid from the AP gamer: Fisher is the first player to get the first two hits of his career in the same inning since Adam Laroche did it for the Braves on April 7, 2004. Which means it’s only 12 more years until Fisher retires in a huff because his kid isn’t allowed to be the bench coach or whatever.

Although, really, he may have grandkids already. His bio says he’s only 23, but this looks like a guy who has been playing for 13 years and is just easing into part-time play: 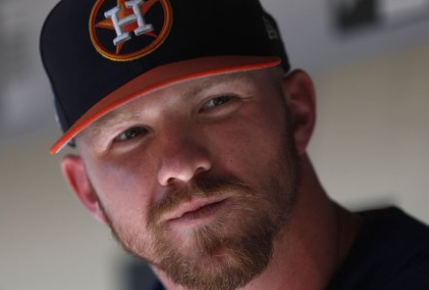 He could play Jordan Zimmermann’s golf buddy in the TV movies. Says stuff like, “I’ve had the same trouble with my daughter, Jordan. But Julie and I are seeing things more eye-to-eye now. You and Heather will soon too.”

Mariners 6, Twins 4: Mike Zunino hit a three-run homer. He’s hitting .396 with five home runs since being called up a couple of weeks ago. Mitch Haniger hit a two-run homer too, as the M’s put up an early 5-0 lead on Ervin Santana. The Twins mounted a comeback but it was too little, too late. Eduardo Escobar, Byron Buxton and Miguel Sano all homered for Minnesota.

Orioles 10, White Sox 6: The White Sox blew a 5-1 lead here, thanks in part to a Wellington Castillo grand slam. Castillo drove in five overall. Trey Mancini had a double and two singles and scored three times. Matt Davidson homered in his third straight game for the Sox.

Dodgers 6, Indians 4: Andrew Miller is supposed to be close to unhittable, but no one has told that to the Dodgers. One night after Cody Bellinger — I will call him Clay at some point — homered off of the Indians’ relief ace, Kiké Hernandez hit a tiebreaking homer off of him in the eighth inning. Miller gave up four runs in two-thirds of an inning, in fact, as the Indians fall to .500. The Dodgers, meanwhile, have won six straight.

Rockies 5, Pirates 1: German Marquez allowed only one run over five innings and Ian Desmond homered as the Rockies snap a three-game losing streak. Marquez also knocked in a run on a squeeze play. Benches cleared briefly in this one when Marquez hit Francisco Cervelli with a first pitch fastball, but it was clearly unintentional and only shade, not punches, was thrown.

Red Sox 7, Phillies 3: Mookie Betts hit two homers, hit an RBI double while collecting four hits in all, driving in three. Xander Bogaerts drove in three as well. I’m gonna go out on a limb here and say that it’s not the Phillies’ year.