The latest update of the American League All-Star voting is in and it reveals three new names at the top of their respective positions.

Yonder Alonso of the A’s has moved ahead of Miguel Cabrera of the Tigers for first place in a crowded first base race. At shortstop Carlos Correa of the Astros has passed Francisco Lindor of the Indians at shortstop. Finally, George Springer has moved into third place among outfielders, joining Aaron Judge and Mike Trout in starting position. Of course Trout is unlikely to be ready to play in the All-Star Game due to his injury, which makes fourth place outfielder Michael Brantly a defacto starter.

Obviously, things can change before the close of voting. But here is where the AL stands now: 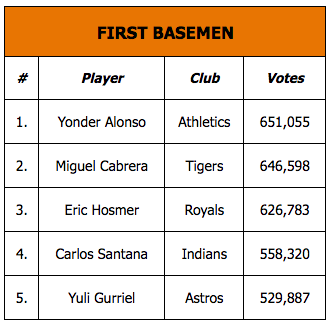 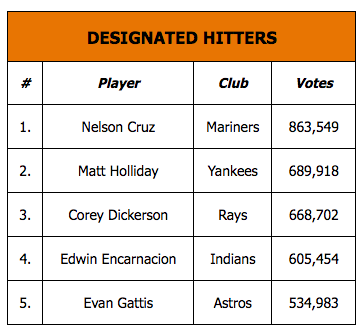