As Bill noted last night, fans in Fenway Park threw a bag of peanuts at Orioles outfielder Adam Jones. Jones also said that fans yelled racial epithets at him. He was not too happy about it after the game, and justifiably so.

The Red Sox have issued a statement about all of that, apologizing to Jones and the Orioles organization, saying they have “zero tolerance” of such behavior, saying that they are “sickened by the conduct of an ignorant few.” 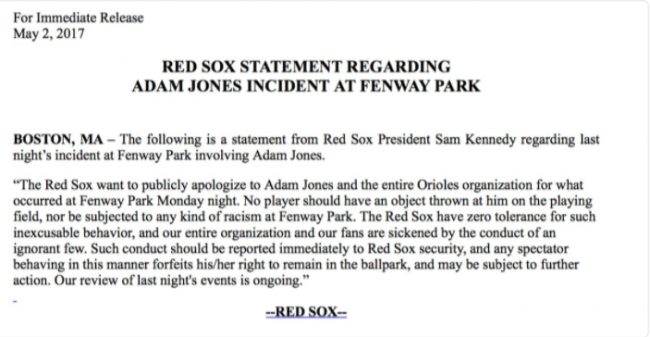 While acknowledging that the Red Sox can’t obsessively police 37,o00 people to completely ensure that such stuff doesn’t happen again, I feel like “forfeiting his/her right to remain in the ballpark” and possibly being subject to “further action” seems a bit less than “zero tolerance.” How about a permanent ban from the park? If that’s not part of the policy as articulated in the statement, I’d suggest it should be.