Between now and Opening Day, HardballTalk will take a look at each of baseball’s 30 teams, asking the key questions, the not-so-key questions, and generally breaking down their chances for the 2017 season. Next up: The Los Angeles Angels of Anaheim.

Let’s look first at the strengths. There’s Mike Trout, the undisputed best player in the game. That’s always a good start. I could bore you with a bunch of stats and historical comparisons here but we’re friends here and, let’s be honest, we don’t need or even want that. The guy is good, ’nuff said.

Indeed, I had an impulse to simply photoshop Trout’s head on this poster and be done with the entire Angels preview: 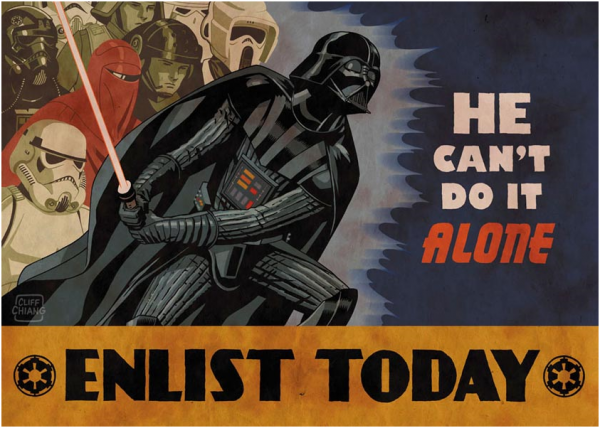 You could almost stop reading now and know what’s up in Anaheim this year.

But honestly, Trout isn’t the only strength here. The Angels have the best defensive shortstop in the league in Andrelton Simmons and a lot of other good defensive players as well, from Kole Calhoun in right, Cameron Maybin in left, Luis Valbuena at first (or wherever he’s slotted once he comes back from a hamstring injury) and Danny Espinosa at second. Their catching corps — Martin Maldonado and Carlos Perez — are solid too. When you lack team depth and have pitching challenges like the Angels do, not kicking the ball all over the field is a good thing. The Angels have kicked the ball a lot in recent years but they’ll be pretty good with the leather in 2017, and that can make up for a lot of faults.

But I ain’t gonna lie, there are a lot of faults here.

Garrett Richards is back from a UCL injury that sidelined him most of last season. He didn’t get Tommy John surgery — he went with stem cell treatment — so the recovery time is lower. Still, it seems like a lot of guys who go the rehab route end up going under the knife eventually anyway, so everyone will have their eye on the Angels’ ace as the season goes on.

Beyond Richards the rotation is suspect. Matt Shoemaker, Ricky Nolasco, Tyler Skaggs — also coming back from injury — and Jesse Chavez do not, as a group, strike fear into anyone’s hearts. I guess the hope here is that Nolasco’s pitching after he came over from Minnesota is more indicative of what he can do than what he did earlier in the year. Or, for that matter, for the past three seasons. If Richards is healthy he’s an ace. The rest of these guys are basically average at best.

The pen has issues. Cam Bedrosian had a fantastic 2016, but it was definitely a huge step up for him and may have been an aberration. closer Huston Street did not have a fantastic 2016, is recovering from a strained lat now and it’s fair to ask whether he’s got what it takes to close in the bigs anymore. Even if that’s too pessimistic an assessment, he’s missed a lot of time this spring. Andrew Bailey, like Nolasco, pitched well after coming to Anaheim last summer but poorly before that, with the poorly looking more like his true level than the well. Otherwise Mike Scioscia has a lot of young arms but not a lot of particularly good ones. Look for his bullpen to feature a cast of thousands.

As for the lineup: Trout is Trout. Albert Pujols is recovering from yet another foot issue. He still has old man strength and can hit some dingers, but he’s a shell of his former self and it’s fair to ask how many lower body maladies a guy whose primary value is tied up in power can tolerate. Yunel Escobar, Kole Calhoun and C.J. Cron are useful and predictable, even if they’re not game-changers. The Angels were 10th in offense in the AL last year. It’s hard to see them making a big leap from that level this year, even if they’re not likely to be too much worse either.

Ultimately, there’s not enough pitching here and there’s not a scary enough secondary or tertiary offensive threat behind Trout to make the offense difficult to deal with. If you play the Angels you’ll score some runs and you can pitch to everyone who isn’t wearing the number 27. That’s not gonna cut it in the AL West this year.