MESA, AZ — I’ve been covering spring training for eight years, and in just those eight years a lot has changed in the Cactus and Grapefruit League experiences. The parks are bigger and fancier and the vibe is far more akin to a regular season major league one than the intimate and laid back atmosphere most people think of when they picture February and March baseball.

Just imagine, however, how much has changed if you’ve been coming to Florida or Arizona for a really long time.

“When we first started coming, you could bring your own beer in,” says Don Harper, a lifelong Cubs fan from Kennewick, Washington who spends his winters in Arizona. “You couldn’t bring a cooler, but you could bring a case of beer and a bag of ice and you just set it down in between you and you just put the ice on it and keep it cold.”

I asked Don if the beer vendors complained.

That was three decades and two ballparks ago. They certainly sell beer at the Cubs’ gleaming new facility, Sloan Park. Cups of the stuff cost more than a couple of cases did back when Don first started coming to spring training.

The price of beer is not the only thing that has changed, of course. The price of tickets is not what it used to be either. Don told me that when he started coming to Cubs spring training games tickets ran about seven dollars. If that. It’s a bit pricer now. Face value for a single lawn ticket, where you’ll be sitting on a blanket on the outfield berm — can be as high as $47 depending on the day of the week and the opponent. Infield box seats run as high as $85. 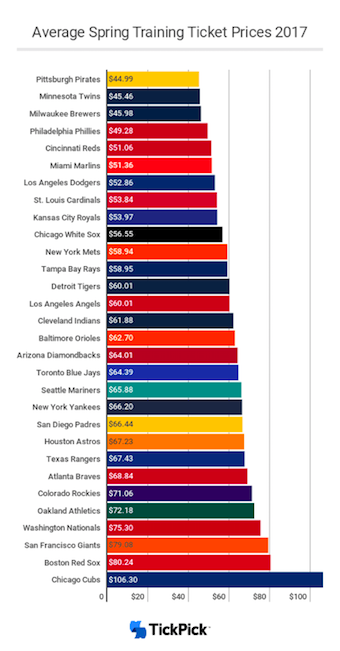 That may be shocking or even appalling to some, but as the automatic sellouts at Sloan Park and those high secondary market prices suggest, there are at least 15,000 people or so for each Cubs home game who don’t seem to mind. Supply meet demand meet the defending World Series champions.

I spoke with two younger Cubs fans, Corey Hayden and Eleanor Meloul, who traveled here from Salt Lake City. On Sunday they lucked out and got a couple of lawn seats for $28. On Saturday, however, they paid $100 a piece on StubHub to get some seats just beyond third base. I asked them if there is some price point that would keep them from coming.

Don Harper wouldn’t do that, but he doesn’t really mind the higher prices he’s paying for his spring tickets. Of course, he’s a longtime season ticket holder so he gets access to the face value seats. I asked him whether his spring training habit would end if those prices got jacked up higher, as the market would seem to bear, or if he had to resort to the secondary market.

Don paused and sighed, suggesting it was a tough question. As he considered it, I put a hard number on it, asking him if he’d still go if he had to pay $50 per ticket. “Yeah, probably,” he said. “$75?” I asked. He paused again.

“As long as I got enough money.”

Don is a diehard who, one senses, will always find a way to make it work. Corey spent a wad of cash on that once-in-a-lifetime World Series ticket, but he and Eleanor seem content to bargain hunt for the most part and splurge strategically. If you’re a Cubs fan — and if you’re not rich — that’s what you’ll have to do. The ticket it just too hot.