MESA, AZ — Over the past couple of seasons we’ve, more or less, gotten used to the sight of metal detectors at major league ballparks. And the sight of long lines outside of them, requiring us to get to the park a bit earlier or else risk missing some of the early inning action.

Like so much else over the past fifteen and a half years, we’re given assurances by people in charge that it’s for “security,” and we alter our lives and habits accordingly. This despite the fact that security experts have argued that it’s a mostly useless and empty exercise in security theater. More broadly, they’ve correctly noted that it’s a cynical and defeatist solution in search of a problem. But hey, welcome to 21st Century America. 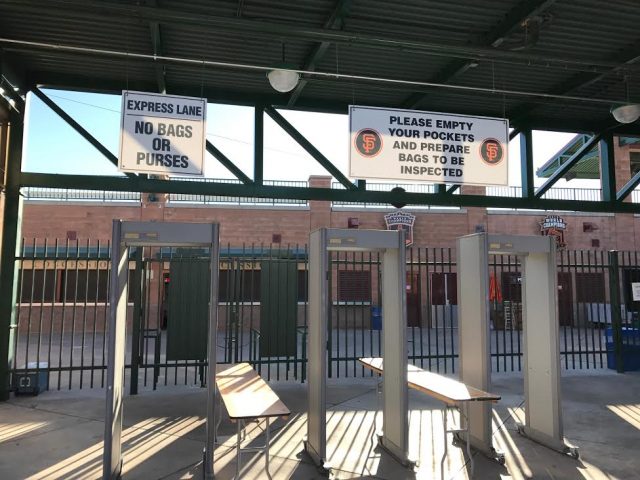 Beginning this year, Major League Baseball is mandating that all spring training facilities use some form of metal detection, be it walkthrough detectors like the ones shown here at the Giants’ park in Scottsdale or wands like the one being used on the nice old lady above at the Cubs facility in Mesa.

I asked Major League Baseball why they are requiring them in Florida and Arizona. They said that the program was not implemented in response to any specific incident or threat at a baseball game, but are “precautionary measures.” They say that metal detection “has not posed significant inconvenience or taken away from the ballpark experience” since being required at big league parks in 2015 and believe it will work the same way at the spring training parks.They caution fans, however, that, as the program gets underway, they should allow for more time for entry.

And that certainly makes sense: 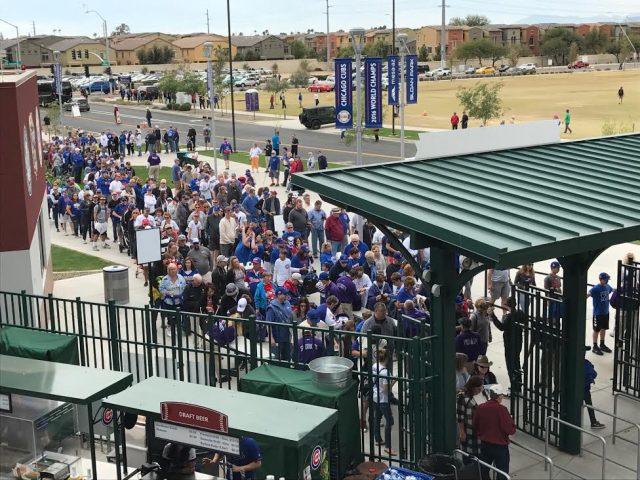 I took this photo a few minutes after the home plate gate opened at Sloan Park yesterday afternoon. As I noted this morning, the Cubs sell out every game in their 15,000-seat park. That’s a lot of wanding and, as a result, it could lead to a lot of waiting.

But the crowds here all seemed to get through the line pretty quickly. Perhaps because the wanding is not exactly a time-consuming affair:

Not every security guard was as, well, efficient as this guy. But hardly anyone walking through the gate was given a particularly thorough go-over. I saw several hundred people go through the procedure soon after the gates opened and most of them weren’t scanned bellow the level of their hip pockets. I went back a little closer to game time when most people were already in the park and the lines were shorter. The procedure was a bit more deliberate then, though not dramatically so. This is all new for the security people too — spring training just started — and it’s fair to say that they are trying hard to balance the needs of their new precautionary measures against the need to keep the lines moving and the fans happy.

On this day at least it seemed that fan happiness was winning. I spoke with several fans after they got through the gates and none of them offered much in the way of complaint about being wanded. The clear consensus: it’s just what we do now. We have metal detectors and cameras at schools and places of work and security procedures have been ratcheted up dramatically across the board. That we now have them at ballparks is not surprising to anyone, really. It’s just not a thing anyone thinks to question.

And so they don’t.