The punishment for the incident in which former St. Louis Cardinals scouting director Chris Correa hacked into the Houston Astros scouting and analytics database has been issued: The Cardinals have been fined $2 million and must surrender two draft picks to the Astros.

The picks are their two highest in this year’s draft: a second round pick, which is the 56th overall and a Compensation Round B pick, which is the 75th overall pick. Moreover, Correa,was sentenced to 46 months in prison for the hack, has been placed on the permanently ineligible list and will no longer be able to hold a job in Major League Baseball. The Commissioner has issued a formal set of findings with respect to the matter. They are set out in full below.

The money, in the grand scheme of things, is not much for a major league baseball team. That’s less than the Cardinals will pay reliever Seung-hwan Oh in 2017. The draft picks are more costly, though not substantially so. As the Post-Dispatch reporter earlier this month the Cards spent aggressively in the international market in the past year or so, inspired in part, one can assume, to compensate for the anticipated loss of draft picks due to the sanction that has now been levied.

I’m sure many will question whether this was sufficient punishment for the Cardinals. My personal view is that, as institutional punishment, it’s rather light given what transpired. Others will likely argue that it was too severe due to Manfred’s findings that only Correa was responsible for the hack and the Cards’ liability here was only vicarious.

I think it’s fair to say that the long prison sentence given Correa in this incident — too long if you ask me — is a far greater deterrent to such acts being committed in the future than anything MLB could do to the St. Louis Cardinals. 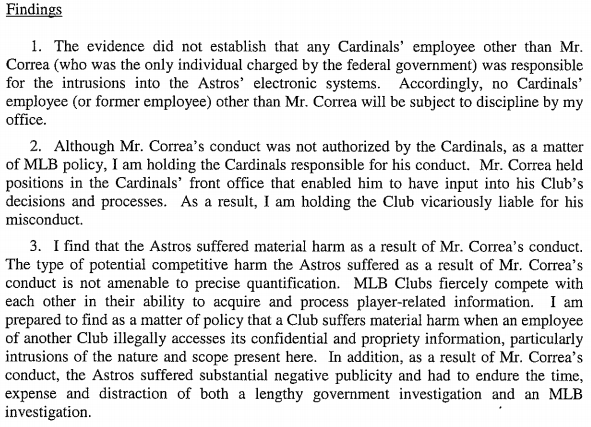 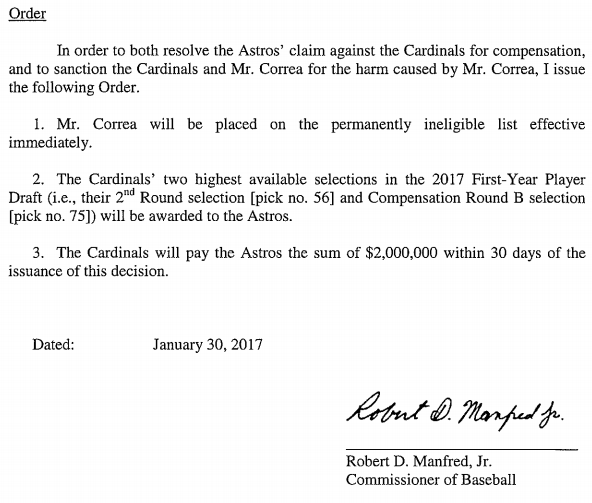