The offseason can be hard on some players. Sure, if you’re a hunter or if you like to travel or if you’re super involved in charities or something your schedule is pretty full between November and early February. But what if you don’t have that stuff in your life? Then you’re just like the rest of us sad wretches, hanging out on the Internet all day, arguing with movie stars.

Well, not everyone hangs out on the Internet arguing with movie stars. But Brewers starter Matt Garza does.

The movie star is Jessica Chastain, who is not a fan of the direction policies with respect to birth control are heading:

Garza took the opportunity to explain birth control to a woman, at least in the own special way a man with six children who had his first child when he was 18 can talk about how he understands birth control: 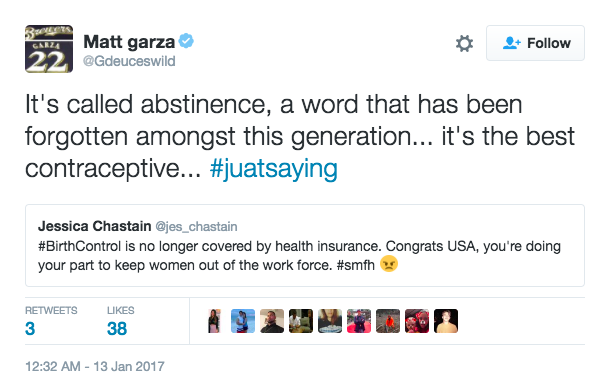 But though abstinence may prevent one from getting pregnant, it is not a “contraceptive.” A “contraceptive” is a means of preventing pregnancy for those who are sexually active. Abstinence, then, is no more a contraceptive than “staying inside” is “sunscreen.” If you wanted to go to the beach and asked a friend for a sunscreen recommendation and he said “don’t go to the beach,” you’d say “uh, thanks” and then you’d ignore their advice on the matter at hand because they’re not interested in protection from UV rays, they’re interested in making sure people don’t go to the beach. Just as Garza here is not opining on contraception, he’s telling people they should not have sex.

Obviously I’m the last person to tell anyone to “stick to sports,” and I would not tell Matt Garza to stick to sports if he doesn’t want to. But really, it’d be a good idea to know what one is talking about when one moves outside the area of their expertise.