Curt Schilling is on the Hall of Fame ballot and, to gain admittance to Cooperstown, he needs 75% of the electorate to vote him in. The problem (a) the electorate consists of journalists; and (b) Schilling seems to think the idea of murdering journalists is hilarious.

This all arose out of a t-shirt seen at a Donald Trump rally in Minnesota over the weekend with the words “Rope. Tree. Journalist. Some Assembly Required” printed on it. If you’ve looked under some of the uglier rocks in the great garden that is the Donald Trump movement this past year, it isn’t terribly surprising to see so ugly a sentiment expressed. Among a certain subset of Trump folks, there is a conviction that the media is the America’s greatest enemy and that anything remotely negative that can be said of Donald Trump is, in reality, a coordinated media conspiracy designed to sink his candidacy. Journalists have been harassed and even attacked at his rallies and have been stalked online by Trump supporters.

Enter Schilling, who thinks the idea of lynching reporters is just grand: 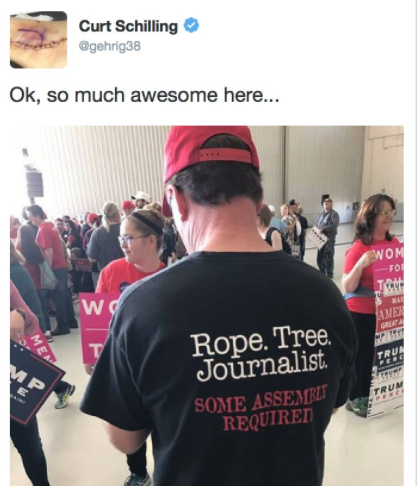 Later, when he was assailed by scores of people, including several members of the media, many of whom have been sympathetic to Schilling in the past, he claimed he was being sarcastic, and that it was merely a “smart ass” t-shirt. Of course, Schilling has often claimed he was joking or being sarcastic when saying truly vile things, despite the fact that there is no evidence of sarcasm to his comments whatsoever. Schilling, ever the brave soul, has since deleted the tweet.

It’s an understandable impulse to mock him, as there are always a million jokes to be made at Schilling’s expense because he has turned himself into a clown. But it’s probably worth noting that three-dozen journalists have been killed this year as a direct result of sentiments like the one Schilling is applauding or, at the very least, joking about. In 2015 six dozen were murdered. To Schilling, the notion of promoting the killing of journalists is, at the absolute best, assuming you buy his sarcasm defense, a “smart ass” sentiment.

One wonders how many other atrocities he finds amusing t-shirt fodder. One also wonders how the journalists with whom Schilling-the-broadcaster was nominally a colleague until last year, feel about his “sarcasm.” One further wonders how those nominal colleagues who have Hall of Fame votes will treat his candidacy going forward.