Cubs outfielder Jason Heyward has had a miserable season. The 27-year-old inked an eight-year, $184 million contract last December despite never having truly lived up to his hype as a prospect. He hit a miserable .230/.306/.325 with seven home runs and 49 RBI in 592 plate appearances during the regular season. The only reason why he continued to get regular at-bats was his stellar defense. Offensively, only a handful of hitters were worse, but he still put up a 1.5 WAR season according to Baseball Reference thanks to his glovework.

Heyward’s offensive struggles continued in the postseason. He logged just one single in 12 trips to the plate against the Giants in the NLDS. He then went 1-for-6 with a walk in his first two games of the NLCS versus the Dodgers. Manager Joe Maddon decided to sit Heyward for Game 3. Perhaps the night off would’ve helped Heyward reset.

It didn’t. Heyward finished Game 4 0-for-5 but he did at least knock in a run with a ground out in the fourth inning. During his second inning at-bat against Julio Urias, Heyward waved feebly at three pitches down the middle of the plate — pitches that would’ve been doubles or home runs from a more competent hitter. MLB.com doesn’t have video of this particular at-bat, so you’ll have to take my word for it. 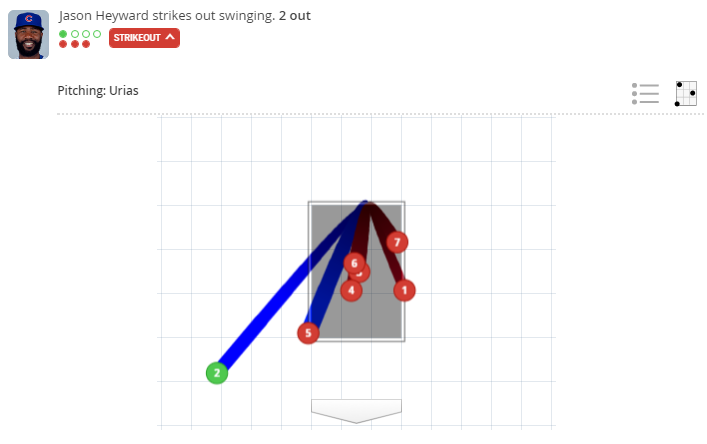 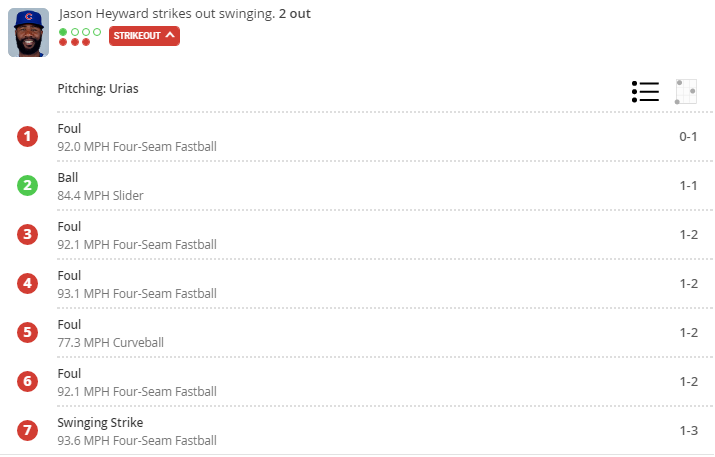 What made it worse was that Heyward’s defense was lacking in Game 4 as well. In the bottom of the second inning, the Dodgers had runners on first (Yasmani Grandal) and second base (Adrian Gonzalez) for Andrew Toles. Toles sent a John Lackey offering into right field. Heyward took a slow and bad route to the ball, then made a mediocre throw home. Remember, this is the painfully-slow Gonzalez running. Somehow, it was a close play and Gonzalez made an adept head-first slide into home plate to beat the throw. Home plate umpire Angel Hernandez ruled him out and that was confirmed upon replay review despite it being demonstrably clear that Gonzalez was safe, bailing Heyward out.

Had the Cubs not scored 10 runs in the game, the Heyward/Gonzalez play would have been a big deal and not just for the replay implications. If Heyward isn’t playing elite defense, then the Cubs can’t afford to have his impotent bat in the lineup in the final two (or three) NLCS games against the Dodgers.