Tim Tebow‘s actual baseball career may not ultimately be of any consequence. Most part-time, half-heartedly pursued hobbies with possible ulterior motives aren’t. But they’re certainly causing some fun reactions among the press and populace.

For example: a lot of baseball players have opinions about Tebow and the $100,000 signing bonus he reportedly received, as well as the fact that he gets to take leave from the instructional league in order to go be a talking head on ESPN on the weekends:

Every minor leaguer gives up so much to chase their dreams, @TimTebow doesn't even have to give up his day job. #justnotright

So Tim Tebow signed for 100k? Glad to know a guy who hasn't played baseball for 10 years is worth 100x more than I was as a player. #brutal

Just so we are clear. Tim Tebow just got a 100K signing bonus to play baseball…. Mine was 1K….

Tebow getting signed means one kid that has been dreaming about playing baseball for a career doesn't get the chance. Wish it was that easy!

The fact Tebow got 100,000 to sign let alone him even getting signed is a joke

It’s certainly easy to sympathize with these guys. From their perspective, Tebow jumped the line and got preferential treatment because of his celebrity.

That said, some of these complaints and others like them either inadvertently miss or intentionally overlook a central truth here: baseball isn’t always a meritocracy and Tebow being given $100K isn’t really about the Mets valuing his baseball skills 100 times more than, say, the Mariners valued Tyler Smith’s.

Though neither Tebow nor Sandy Alderson want to admit it, a big part of signing Tebow is the gimmick of his presence in the Mets organization, fans flocking to Port St. Lucie and some hard-to-quantify yet certainly real value that the Mets think Tebow will provide as a motivator or clubhouse presence or what have you, much the same way the Rangers keep Russell Wilson in the organization and let him show up to spring training each year. The only difference is that the Rangers don’t pretend that Wilson is anything other than a motivational speaker.

I don’t begrudge these players’ anger. It has to sting to see Tebow being feted like he has been. And the bit about him being able to keep his day job rather than dedicate himself 100% to baseball the way they are all expected to makes all of this a lot more galling than it otherwise was.

At the same time, though, I don’t begrudge Tebow getting paid. He’s going to make the Mets that $100K back one way or the other. Even if he’s not going to do it via his baseball skills. 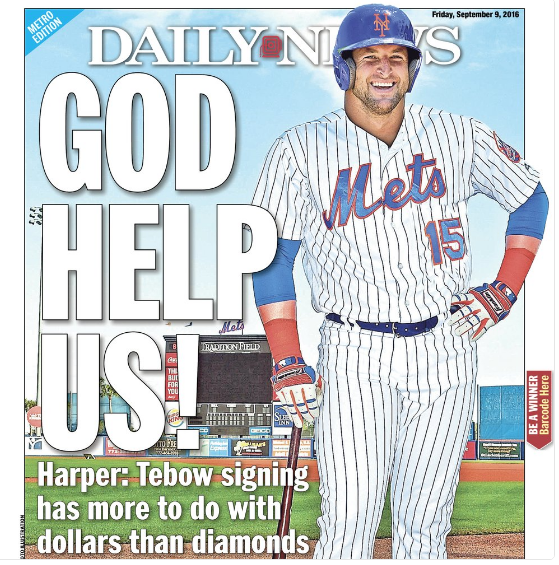