Big news from the Twin Cities: the Minnesota Twins just announced that General Manager/Executive Vice President Terry Ryan has been fired. He will be replaced on an interim basis by Assistant GM Rob Antony.

In late May a “high-ranking Twins official” told columnist Mike Berardino that ownership was “100 percent committed” to Ryan keeping his job. The club went 10-17 in June and is 8-5 in July, which is actually an improvement over its April and May performance, but one gets the strong impression that Ryan’s ouster is about more than just the 2016 record.

Rather, it’s about team direction. This was Ryan’s second tour as the GM of the club. His first one was successful, as he helped build a team that won four division titles from 2002 through 2006. Since his return following the 2011 season, however, the Twins have posted 90+ loss seasons three times and are on their way to a fourth 90+ loss season in the last five. Last year’s 83-79 team is looking more and more like a fluke each passing day.

Ryan’s approach worked for several years, but as the 2000s wore on, his affinity for scouting and old school baseball as opposed to the analytical approach most clubs were rapidly adopting became increasingly anachronistic. He has been historically loathe to spend money on a needed top tier free agent in any given year yet has, perversely, spent a LOT of money on several mediocre or outright bad players such as Ricky Nolasco, Phil Hughes and Mike Pelfrey. This worst-of-both-worlds approach has given the Twins neither top talent nor financial flexibility.

Meanwhile, the player development system that served the Twins so well 15 years ago has been far less successful in the past decade. There is a new, promising core consisting of Byron Buxton, Jose Berrios, Miguel Sano and Max Kepler, but Ryan’s ability to build around it is dubious given his moves over the past several offseasons. Many Twins fans have felt this for years. Now it seems that Twins ownership agrees with them.

Here is the club’s statement, complete with comment from Ryan himself: 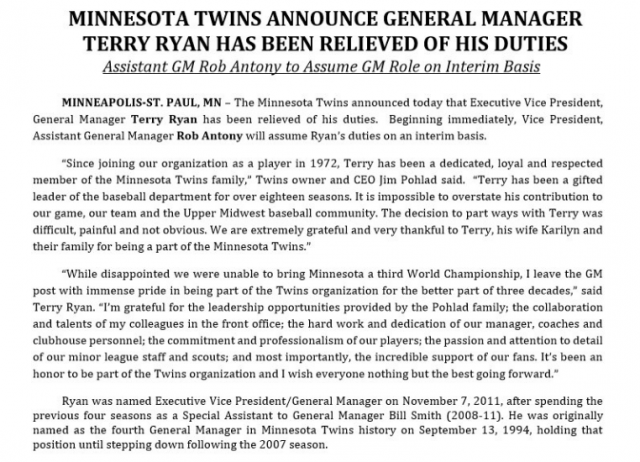