Back when Bryce Harper was in the minors he got into some sort of dustup after taunting an opposing pitcher. I’m fuzzy on the details, but it may have been a gesture during a home run trot a day after the pitcher plunked him or something. It made the news for a day or so as those things tend to do. Regardless of the exact details, I remember writing something about how Harper was a punk who had a lot to learn and blah, blah, blah, the usual autopilot sports take stuff.

Not long after that I had an epiphany: “What the hell do I care? What did Bryce Harper do to me? Is this really a bad thing, or am I just saying it’s a bad thing because I’ve been conditioned to think and say that it’s a bad thing when athletes behave in certain, non-conforming ways?”

I’m sure I’ve reverted to autopilot sports takes here and there since then, but that Bryce Harper incident many years ago was when I started to try to change the way I thought about athletes and their behavior. When I started to do what I still work hard to do when I talk about and think about sports:

One would think such considerations are obvious, but it’s extraordinarily hard to find commentators or fans who approach sports and athletes in this way. To the great majority of people, athletes are characters in a grand drama. Heroes and villains who are obligated to fulfill certain roles and are subject to very strict rules of decorum. Not because those roles make any sense in relation to the world at large and not because those rules make any sort of logical sense but because, well, just because.

When you break out of the old habit of viewing athletes as heroes, villains and gladiators, your view of them changes pretty dramatically. The guys who are spoken highly of by sports commentators and fans start to seem less admirable to you because you realize that they’re spoken highly of primarily because of how they conform to their expected roles, not how they are as human beings in a larger world. In reality, we don’t know what kind of people most of these men are because we don’t know them outside of sports. That team leader who has the respect of his peers can be a jackass in his personal life. We may never know. Or, when we do know, his status as a leader seems beside the point. Meanwhile, the alleged clubhouse cancer may be a truly good and interesting person and his cancerous attributes may simply be a function of his failure to conform in more or less harmless ways.

In context of that professional world (i.e. the clubhouse as office where ballplayers do their business) the leader being respected is a great thing and the cancer not conforming could very well be a bad thing because it’s good to have leaders and no one wants a difficult coworker. And, of course, eventually, good leadership likely helps teams win and non-conforming behavior could lead to the team performing poorly.

But you and I and the commentators don’t work in that clubhouse. We don’t necessarily have to care about such things. Just because a manager or player thinks a player is a jerk doesn’t mean we have to. Maybe we just like his style of play. Maybe we like his social media presence. Likewise, just because the team leader is respected doesn’t mean we have to like him. We’re not on the team. He’s not our leader. Maybe he’s not a nice person. Maybe he is. The point is that the qualities they bring to their job are not the only qualities that matter because they don’t exist in a hermetically-sealed world. They live in the real world and all sorts of stuff impacts what makes a person a person.

This is why I’m drawn to the players about whose lives we learn a little bit about and who seem to march to the beat of their own drummer. Maybe that’s a little unfair of me — I’m sure many of the traditional, conforming “take the things one game at a time” guys are cool and good people; we just don’t know much about them, likely by their own design — but it’s why I’m drawn to the guys who get press for being weirdos. People say I’m just a contrarian who likes clubhouse cancers, but it’s not that. I just like it when I can see the walls between the real world and the sports world that fans and commentators have spent so long erecting being broken down.

All of that is a long way of explaining that I’ve been on Team Bryce Harper for a long time now. At least since a few days after that incident back in the minors. I offer it to show my bonafides as a dude who tries to be fair to players who are a bit different. Some would say a dude who bends over backwards to promote players who are a bit different, which, fine. I offer it so that, when I do fall into “that guy is a knucklehead” mode, you know I have considered it seriously and that I’m not just offering hot takes for the sake of hot takes. 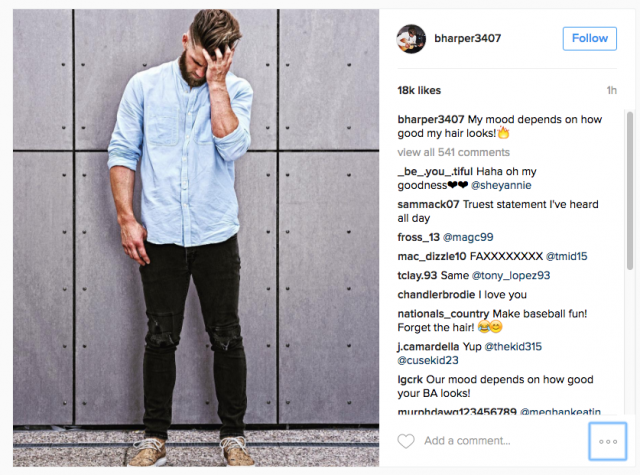 OK, sorry. I took a minute and thought about how Bryce Harper is a human being and all of that and now I’m OK.