SAN DIEGO — You can bet that the folks at Major League Baseball are not gonna dig this: one of the singers of the group, The Tenors, who sang the Canadian National Anthem held up a handwritten sign that read “All Lives Matter” during the song. He likewise altered one of the lines of the song to say “all lives matter.” Specifically, they changed the line which goes “With glowing hearts we see thee rise. The True North strong and free” to “We’re all brothers and sisters, all lives matter to the great.”

If that doesn’t register with you, let’s try it this way:

@craigcalcaterra Saying "All Lives Matter" is like going to a 5k Cancer run with a sign that says "Cure all diseases".Your missing the point

The fact is, black people’s lives are regrettably, compared to other people’s lives, undervalued in the United States. My hope is that this Canadian National Anthem singer does not fully understand that dynamic here and, rather, he was trying to offer a message of love and inclusion, however ignorantly he was doing so. My hope is that he was not adulterating his own country’s national anthem in an effort to make some reactionary political point at the All-Star Game. But I presume we’ll hear more about that soon.

UPDATE: Following an outcry on social media, particularly in Canada, where the changing of the words to the anthem were not well received, the Tenors released a statement: 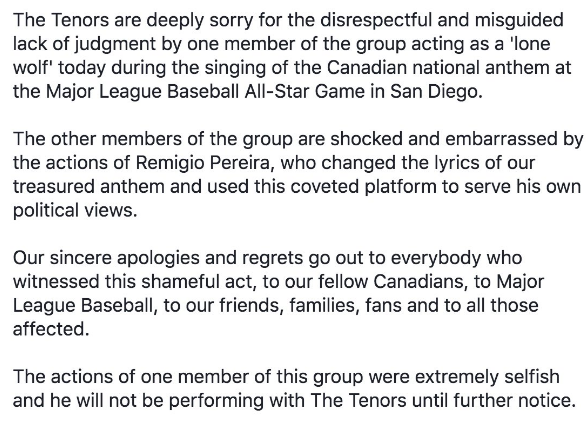