Jose Reyes served his time. At least the time Major League Baseball gave him. The legal system, of course, couldn’t do much with him. So as far as all of the legalities and the workplace sanctions go, Reyes is in the clear.

I don’t begrudge Reyes playing baseball again. Domestic violence suspensions are not one-and-done lifetime deals and he’s eligible to play, so he should be able to play if someone will have him. Beyond the formalities of it, he has a family to support and keeping a domestic abuser away from his profession could perversely serve to harm the family he abused a second time. I can’t say that, were I running a major league baseball team, that I’d be eager to sign Jose Reyes, no matter how cheaply he came, but the fact that someone did is neither scandalous nor objectively wrong, even if it’s a most uncomfortable situation for many Mets fans to have their own self-interest tied up in Jose Reyes’ professional interests for the next three months or so.

But not all Mets fans are uncomfortable. Last night, when Reyes made his return to the Mets, he was greeted warmly by a great many people in Citi Field:

I understand that a lot of sports fans don’t look beyond what happens on the field. I likewise understand that a lot of Mets fans have fond memories of Reyes and the decade he spent in orange and blue. But it’s nearly impossible to believe that those fans giving Reyes an ovation last night are unaware of what happened last October 31 in that hotel room in Maui. Unaware that, according to Reyes’ wife in her statement to police, Reyes dragged her off the bed in their hotel room, choked her and slammed her up against a sliding glass door. That she was bruised in multiple places and had marks on her throat. That the hotel staff called 911 when they saw her and that the medics who responded thought it best to take her to the hospital.

The fans in attendance at Citi Field last night knew this, but many of them still cheered this man. They cheered this man despite the fact that far smaller transgressions — or even imaginary, made-up transgressions like, say, making a comment about testing free agency after the season — cause even hometown players to be booed, especially in New York.

Fans buy their tickets and they can do what they want. If they’d like to cheer for Jose Reyes, they can cheer for Jose Reyes. But I’d sure like to know what goes through the mind of someone who does. I’d like to hear the justification they make to themselves in which memories of some baseball exploits from five to thirteen years ago outweigh an ugly and violent act from eight months ago when it comes time to decide how to greet a guy. 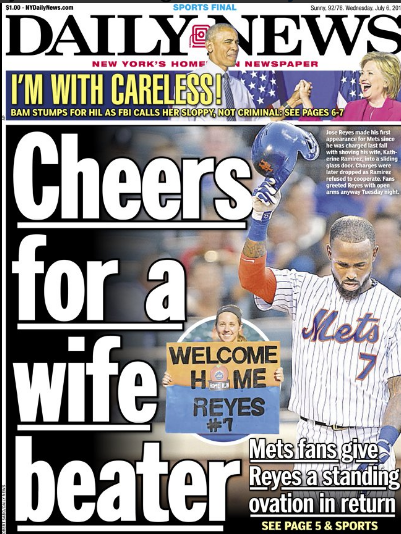