David Price gets the ball on Tuesday night as the Red Sox host the Rangers. He’ll face A.J. Griffin in a 7:10 PM EDT start.

Price has been frustratingly inconsistent this season, coming into tonight’s action with a 4.74 ERA. He exited his May 7 start against the Yankees with a 6.75 ERA, but then went on a stretch of eight starts where it looked like he figured things out, bringing that ERA all the way down to 4.24. But on June 24, he served up six runs in 2 1/3 innings to the very same Rangers, and last Wednesday forked  over four runs in 6 1/3 innings to the lowly Rays.

Going strictly by strikeout and walk rates, which are a very good starting point for evaluating a pitcher, Price’s 26.3 percent strikeout rate nearly matches his career high (26.9) and his 5.5 percent walk rate is nearly a full percentage point lower than his 6.3 percent career average.

So what’s been the problem? Price is getting hit way harder than he ever has been before. Going by the three buckets found on FanGraphs — soft, medium, and hard contact — Price’s soft hit percentage is only 17 percent, right around his career average (17.7). His medium hit percentage is 48.4 percent, way lower than his 55 percent career average. And, as it follows, his 34.6 percent hard hit rate is tremendously higher than his 27.3 career average. Price has essentially traded in about six percent of medium hit batted balls for hard hit batted balls. That has led to A) a high batting average on balls in play, .323; and, B) a high home run rate, 15.5 percent as a percentage of fly balls allowed.

Price’s velocity is down across the board significantly, which might explain that trend, as Brooks Baseball illustrates: 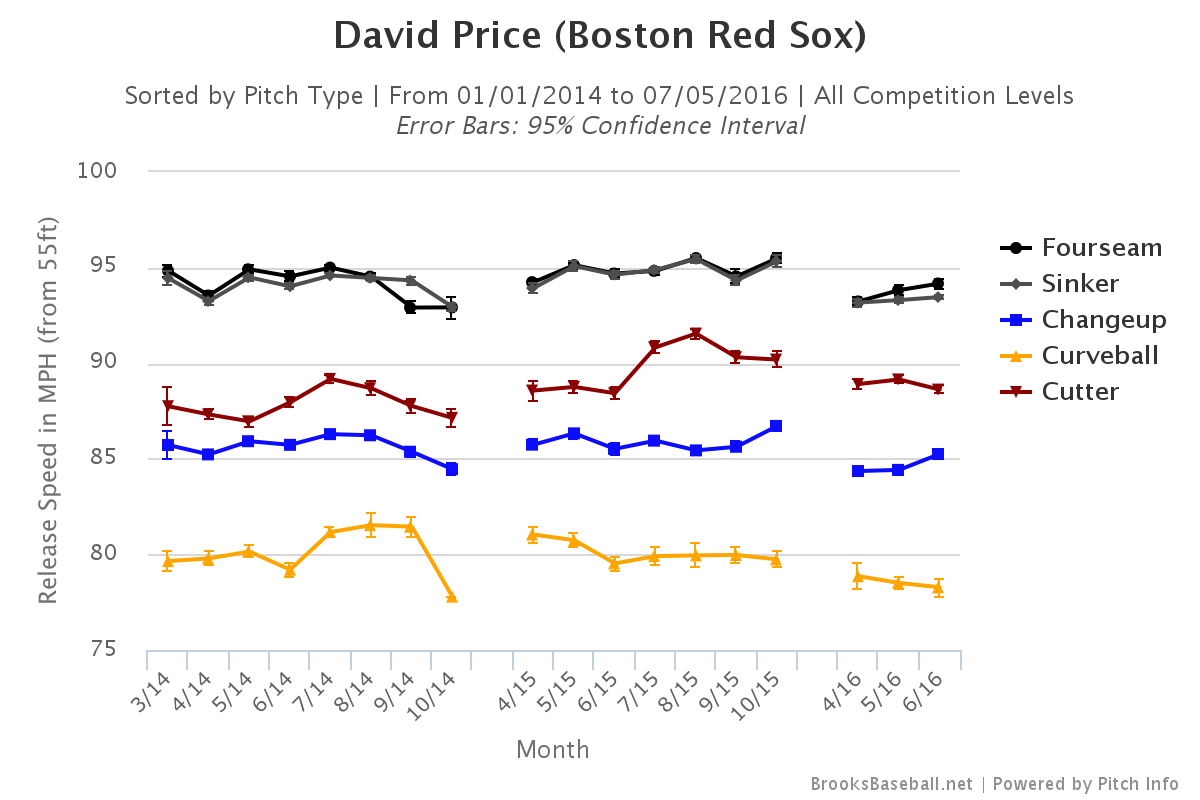 Whatever the explanation for his woes, the Red Sox are hoping Price is able to find the answer soon. Tuesday’s start against the Rangers would be a great time for that.

The rest of Tuesday’s action…