I’ll preface this by saying that what happened to baseball in Montreal totally sucked and that the Expos should rise again in the form of an expansion or relocated team with ownership that actually cares. I’ll likewise say that the 1994 strike sucked worse for the Expos than any other team because (a) they were clearly the best team in baseball at the time the season abruptly ended in August; and (b) the strike and its fallout led to the team being broken up and the promise that had been building there to totally be destroyed.

However, the extent to which “man, that was a bad break for the Expos” has turned into the “the Expos definitely would’ve won the 1994 World Series had it happened” over the years has always been strange to me. And it still manifests itself, most recently in the form of this cap you can buy: 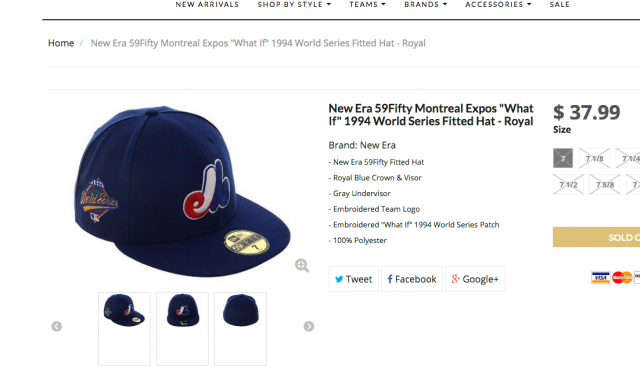 I can see that a Montreal fan from that time might get some satisfaction over that cap and if they want one, hey, do what you want. But it’s certainly a cap that says more about the emotions of the owner than it says about what might’ve happened if the 1994 season had gone on.

Not great odds. Great enough to inspire Expos fans to buy the cap? It would seem so, given that the last time I checked the link the cap was sold out. But I can’t help but think that, based on how the past 22 seasons of Wild Card ball has gone, that the 1994 Yankees, Braves, Indians, Reds, White Sox, Dodgers or any other number of teams might have just as much a claim to such a thing.