The Blue Jays led the Phillies 4-0 and were threatening more runs with the bases loaded and one out in the top of the third inning against Aaron Nola. Darwin Barney hit what appeared to be an inning-ending double play to shortstop Freddy Galvis, who flipped to second baseman Cesar Hernandez. Hernandez leaped to avoid an incoming Kevin Pillar, making a weak and late throw to first base. A run scored and Barney was safe at first base.

The Phillies challenged the call, however, and the ruling was overturned, giving the Phillies an inning-ending double play after all.

Here’s another video with a better angle. And here’s a good screen capture: 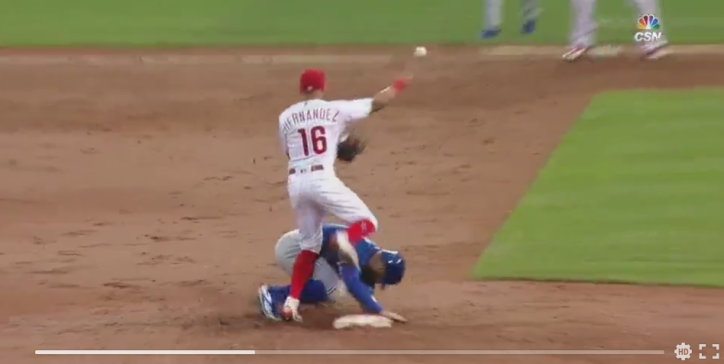 One can make a tenuous claim that Pillar attempted to stay on the base. Pillar certainly curled his body up in an attempt to interfere with Hernandez.

Many will complain about baseball becoming wimpy with rules designed to protect the fielders. I, for one, think the sport is headed in the right direction when defenseless infielders don’t have to worry about 200-plus pounds of human flesh and bone speeding towards them in an attempt to prevent a double play. The less we have incidents like the ones that involved Ruben Tejada, Alex Avila, and Buster Posey, the better.