Brad Ausmus got suspended for his meltdown after being ejected from Monday night’s game against the Twins. During the meltdown he took off his hoodie and draped it over home plate. Which was a metaphor for something I guess. I don’t know. He was trying to show fire and inspire his troops. Just roll with it.

The hoodie is now being auctioned by MLB. From the description:

Following his ejection, a clubhouse attendant collected the items from the field and returned them to the Manager’s office. Ausmus donated the items directly to the Detroit Tigers Foundation with the goal of raising money for youth baseball in Detroit. Proceeds from this auction will directly benefit the Tiny Tigers t-ball program funded by the Detroit Tigers Foundation at Detroit PAL. Neither item has been washed since the May 16 game and both items show dirt consistent with being placed or tossed on the field. Both items feature the #7, as seen in the photos.

And now it can be yours. If you have a lot of money anyway, because the bidding is over $4,600 at the moment: 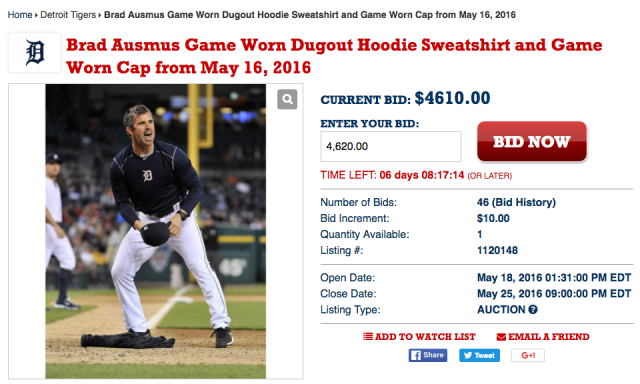