It was 4-4 in the top of the 11th of Tuesday night’s game between the Astros and White Sox. George Springer singled with one out against Matt Albers and was looking to run with Carlos Correa at the plate. He took off on the 0-2 pitch, which Correa swung through for the strikeout. Here’s where Correa ended up after his swing. 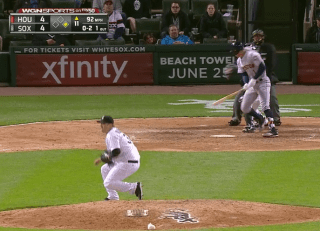 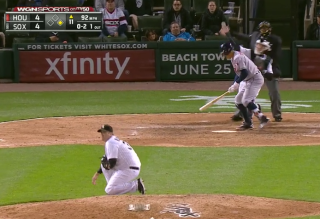 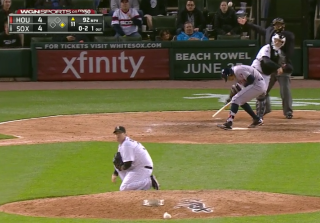 This was, by any definition, interference. It was Correa’s momentum from the swing that carried him through home plate, but that’s irrelevant, and while he did eventually make an effort to duck, it happened too late for Alex Avila to make the throw he wanted to make.

If interference had been called by home-plate umpire Tony Randazzo, Springer would have been out* and the inning would have been over. Instead, Springer was credited with the steal, Evan Gattis followed with a two-run homer and the Astros went on to win 6-5.

It seems to me that umpires have gotten better recently about calling interference on these sorts of plays. It used to be that interference was hardly ever ruled unless the catcher hit the runner with the ball or with his arm on the follow through. Obviously, that shouldn’t be necessary to draw the call. Randazzo, though, seemed to be watching the steal attempt, rather than the clear case of interference in front of him.