Forgot to mention this in my earlier Bautista-Odor post, but it’s really bugging me. I’ve seen a lot of people — almost all of them Blue Jays fans, but let’s ignore that for a second — referring to Rougned Odor‘s punch to Jose Bautista‘s jaw as a “sucker punch.” Here’s an example. And another. And another. Here’s a total Twitter search for it and you can see a gabillion examples.

This is madness. A sucker punch is, by definition, a surprise punch, hitting a person who is not expecting it, not looking or who is otherwise unaware that he’s about to become the recipient of some violence. It is not a punch to someone who has literally got his dukes up, preparing for a fight. And, in Bautista’s case, has a hand extended already, be it for a punch or some preemptive defense or whatever it is he’s doing here: 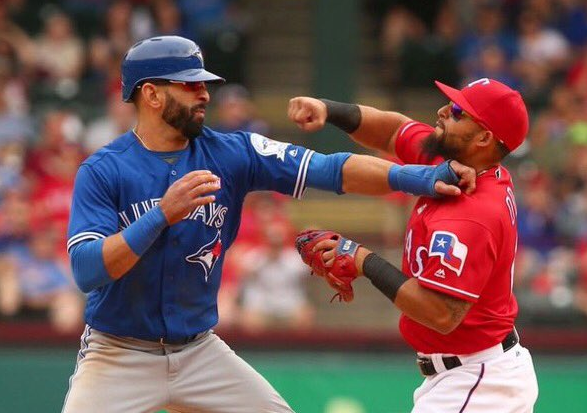 What Odor did after that was not a “sucker punch.” It was a “punch.” Because the two men were in a “fight” and just because Bautista lost the fight does not make it a “sucker punch.” Nor is it a sucker punch because, most of the time, ballplayers don’t punch each other. Unless I missed something and there are unwritten rules about that too.

Like I said above, this almost all comes from Toronto people because, it seems, they are very invested in making Odor out to be the bad guy here. When, as I explained this morning, everyone was kind of a jackwagon in this whole incident. If it makes you feel better to think one side was way worse than the other, fine, do what you gotta do. But at least appreciate that words mean things and “sucker punch” does not mean what you’re saying it means here.