This smelled like a fake story when I heard it the other day, but now I’ve seen it picked up by MLB.com and the Daily News and other places so all I can conclude is that people with judgment this poor really do exist.

The person: a guy named Matt Sassi, a Mets fan, who made a bet with a friend at the beginning of the season that he would get a Bartolo Colon tattoo if Colon hit a home run this season. Given that Colon had played so long and grown so old without ever hitting a dinger it wasn’t exactly a high risk bet, but when the stakes are so high, even a seemingly sure thing strikes me as dangerous.

Yet, here we are. And here he is, with a really bad tattoo: 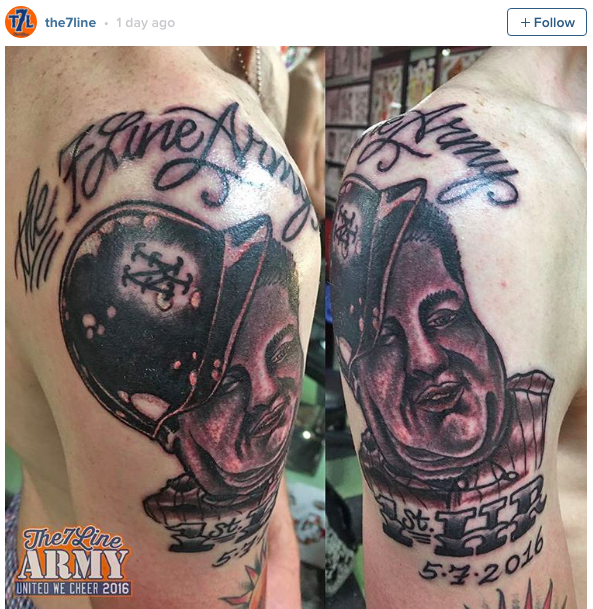 There are few things in the world less important than a mans word. In this case, a statement was made at the beginning of the season, and it came true. Matt Sassi said to his buddy, Anthony Triola: “If Bartolo Colon hits a home run this year, I’ll get a commemorative tattoo”. Before the game on Saturday I met them in McFadden’s and they told me about this bet. You’d think, ok… that’s not happening. Right? WRONG!
Coolest part of the bet was that they were both there to witness the feat in person. Matt is a Middletown, NY native that moved to San Diego. What were the odds that Bart would be on the hill the day of our invasion? What are the odds he’d go yard? Slim to damn near impossible.

Matt could have chickened out and not gotten it at all, or gotten something small that could easily have been hidden. Instead he went balls to the freakin’ wall with pretty much a half sleeve. Tossed THE 7 LINE ARMY on there for good measure and added the date of Bart’s now famous swing.
You manned up, Matt. Bravo.

If that’s “manning up,” I’d be pretty happy with chickening out, but you be you, Mr. Sassi.