Yankees third baseman Chase Headley finished April without registering an extra-base hit. Across 71 plate appearances, he registered only nine hits for an uninspiring .150/.268/.150 triple-slash line. Speaking to David Laurilia of FanGraphs, Headley said that Yankee Stadium isn’t as hitter-friendly as many people think it is, and added that the shift has helped to limit his offensive success.

According to StatCorner.com, Yankee Stadium is indeed better for left-handed hitters, and particularly so when it comes to extra-base hits. It lists park factors for handedness, setting 100 as average. A higher number means it’s more hitter-friendly. Here are the left-right numbers as of today’s writing:

Headley’s hypothesis seems to have some merit. But his claim that shifts have been hurting him doesn’t seem to hold up to the numbers. 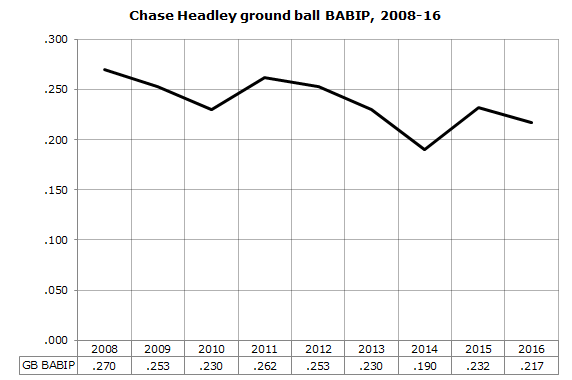 Headley’s ground ball BABIP (batting average on balls in play) this season is only .022 behind his career average of .239. As he’s only hit 23 ground balls total this season, the difference between .239 and .217 is less than one hit.

Where Headley’s BABIP is notably lower is line drives. His career average line drive BABIP is .698, but it’s only .333 on nine line drives in 2016. This could be simple bad luck or it could mean Headley is making worse contact. FanGraphs’ batted ball data suggests Headley has been pulling significantly fewer balls (36 percent to his 45 percent career average), and he’s making “hard” contact less often (21 percent versus his 31 percent career average). Overall, there’s been very little change in his ground ball rate versus his fly ball rate.

Headley mentioned to Laurila that if he could, he would try to hit fly balls to the pull side more often. “I’m working on that,” he said.