Sad, sad news: Oakland Athletics minor league pitcher Sean Murphy died in Arizona on Monday. He was 27. A cause of death was not given, though the Athletics said he passed away “unexpectedly.”

Murphy has been in the A’s system since 2010, when he was selected as a 33rd round pick. He played five seasons in the A’s system at various levels. The past year appears to have been an extraordinarily rough one for him. He missed the entire 2015 season due to having Tommy John surgery. This past February Murphy was suspended 50 games after he tested positive twice for a drug of abuse. 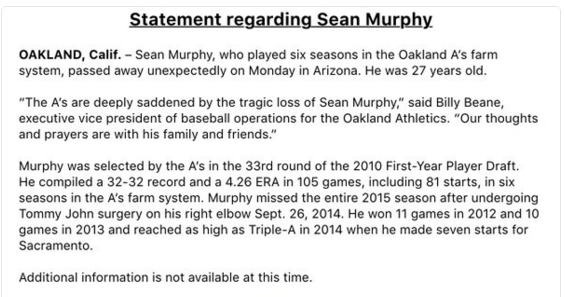