Jake Arrieta may be the best in the business right now and is waking up today to his second no-hitter. But he’s also a man of his word.

Arrieta struggled in Baltimore for four seasons, never fulfilling the great potential everyone thought he had. Even today some Orioles fans I know wonder why the heck he never put it all together there, but a few years back some of them were just annoyed as all get-out.

One night, in 2013, Arrieta had a bad outing. As so often happens, a fan on Twitter gave him a hard time about it, saying “you f***ing suck, go back to the minors.” Normally you should ignore people like that and most ballplayers do. Arrieta responded, however. And not angrily and defensively, but matter-of-factly: 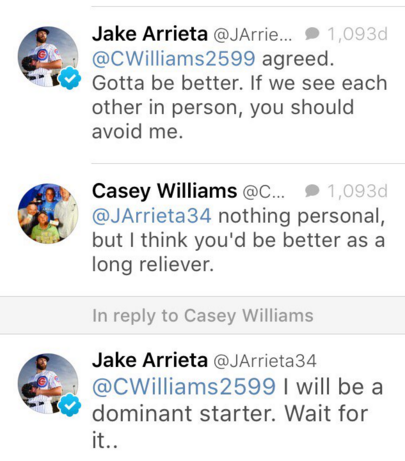 The man put his money where his mouth was. That’s for dang sure.

(h/t about a million people retweeting that exchange this morning, though I assume someone specific found it last night)