Dodgers ace Clayton Kershaw already has arguably the most devastating arsenal in the game. His fastball sits around 93 MPH and can get into the mid-90’s. With that, he mixes in a slider around 87 MPH and a curve at 73 MPH. On very rare occasions — one percent of the time — he’ll throw a change-up.

Kershaw deceives batters with lots of movement, but imagine if they had to account for severe changes in speed as well. Scary thought.

As it happened, Kershaw decided to start off Tyler Flowers‘ fourth-inning at-bat with a 46 MPH eephus. 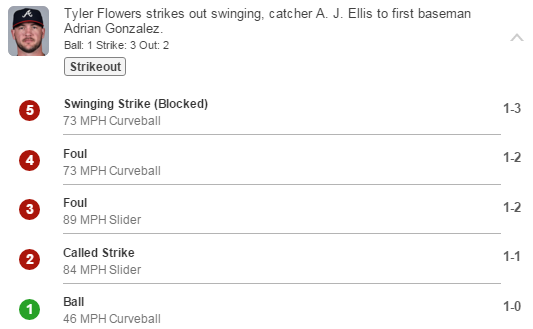 The whole thing was made better by Dodgers broadcaster Orel Hershiser saying that Kershaw wouldn’t work on his change-up in a 1-1 game right before the lefty threw the eephus.

The game went 1-1 into the 10th and the Dodgers eventually won 2-1 thanks to a 10th inning RBI double from Yasmani Grandal.