Today’s New York Daily News sports cover is teases a story about how Barry Bonds doesn’t think A-Rod will catch his home run record. Which is not exactly huge news given that he’d have to hit 75 homers in two seasons to break the record and the odds of that happening are really low. It’s also just the latest in the line of  “hey, now that Barry Bonds is back in baseball, let’s ask him about current players” stories. I suppose those are fun enough, but again, it’s not exactly front page news.

But hey, Bonds + A-Rod is a story, always. We certainly know that here, so I won’t begrudge the Daily News its story. The cover, though, is hilarious: 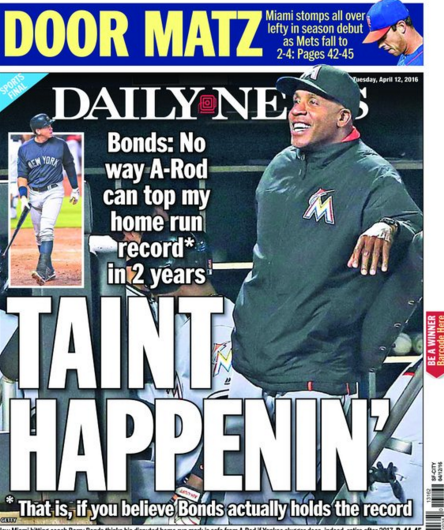 I imagine, somewhere, there is a person who both knows and cares who Barry Bonds is AND has no idea that he took PEDs. It’s hard for me to imagine such a creature — the people who don’t care about him and the people who do know about his PED use are legion, of course — but I presume at least one or two of them exist in the wild. This cover and its asterisk and oh-so-clever pun must be for them.

Or it’s possible that the people at the Daily News who do Bonds and A-Rod stories are like Guy Pearce in “Memento” and they must constantly write about the PED connections or else it will totally fall out of their minds.

Abreu, the 2020 AL MVP, spent his first nine major league seasons with the Chicago White Sox. The first baseman became a free agent after batting .304 with 15 home runs, 75 RBIs and an .824 OPS this year.

The Astros announced the signing. Abreu is scheduled to be introduced in a news conference at Minute Maid Park.