Hunter Pence may be my favorite baseball player. I freely admit that a huge part of that is because I have interviewed him twice and he was very nice to me, gave me really intersting answers that I used in good articles and, to boot, he took the time to ask me stuff, not just answer my questions. Based on those personal interactions I decided that he was a good guy.

Most sportswriters won’t admit that sort of thing to you. They all have favorites for many of the some reasons — well, maybe not the “asked me stuff too” part, but definitely the “make my job easier” part — and how someone feels about a person is going to naturally affect how they are covered, even if it’s subtly. Or that they are covered. Or how, later, if something negative happens with the player, the negative stuff is handled. The facts are almost always right — I don’t know any baseball writers who are so in the tank for a person that they wouldn’t get the facts straight — but there’s a lot more to a story than just facts.

Reporters will tell you that their vibranium-fortified journalistic training and impartiality keeps them from falling prey to such human biases, but everyone is human and everyone has biases, even if they’re subtle. Just look to the coverage players touted as “good guys” get vs. certain other players who tend not to be described that way in passing. I’m convinced Torii Hunter could knock over a children’s hospital and some reporters would praise him for how candid he was in his  jailhouse interview. People are human. Some more so. I won’t speak for any other specific reporter, but I will freely tell you that if Hunter Pence gets involved in an ugly scandal, you can trust me to report the facts properly, but don’t necessarily make me the only person for the commentary, because I’ll likely have a sad if he ever steps in it real good.

In the meantime, we don’t have to worry about that. We can just laugh at how fun he is. As he demonstrated with his Twitter avatar and bio today: 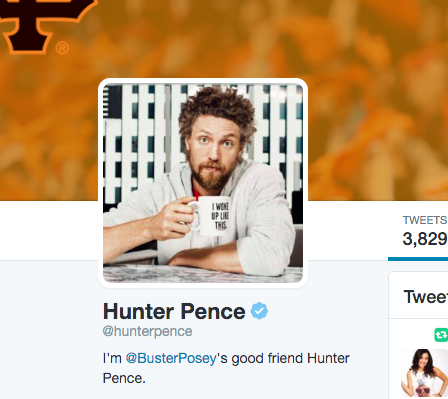 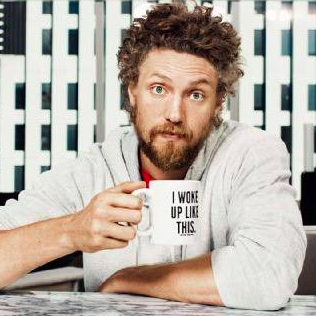 UPDATE: To show you how in the tank I am for Hunter Pence, I liked this before I even realized it was a joke based on the Jon Miller call of his home run yesterday.

I can never quit you, Hunter. If you ever get embroiled in a clubhouse controversy, I will DEFINITELY blame the other player. No matter what actually happened.