Yesterday Bill wrote about the continuing — and important — efforts of some to get the Indians to get rid of their racist mascot, Chief Wahoo. The war over the mascot has been long-fought, but the most high-profile battles in this war take place on Opening Day in Cleveland, where the stadium is routinely picketed by anti-Wahoo forces. It’s always picketed by at least some people, but Opening Day is a focal point of these protests.

Two years ago one of the more ridiculous scenes ever witnessed at an Indians Opening Day took place. A fan showed up outside the stadium and got in the face of the protesters. The man was dressed up in stupid faux-Indian regalia and wore redface, which is insane to even contemplate in the 21st Century, but that’s what he was wearing. Even better? He felt it was important to explain to an actual Native American man how he was wrong to take issue with the Indians and their mascot.

Below is the famous photo of the incident, taken by Cleveland Frowns’ Peter Pattakos, who was working with a documentary filmmaker about Chief Wahoo and the “Indians” name. The full story behind what led to that confrontation and some additional photos can be seen here. 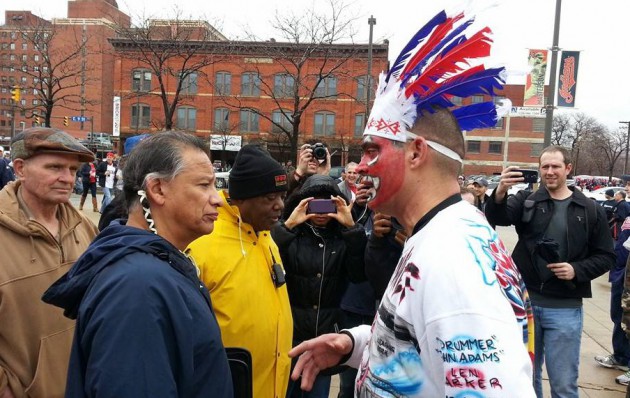 It was equal parts ridiculous and offensive and you have to wonder what in the hell the fan in question was thinking.

Well, there’s more to the story. Over at Cleveland Scene, Sam Allard reports that the fan in question, Pedro Rodriguez, showed up again yesterday for the Indians’ postponed Opening Day game and once again met with the Native American in the photo, Robert Roche, who is the local head of the American Indian Education Center. They talked. Rodriguez apologized. They embraced. It was pretty dang touching.

Rodriguez isn’t completely changing his tune. He is still a strong proponent of the Indians nickname — people disagree on the appropriateness of that as well as the mascot — but the tenor of the meeting and the photos from it were far more uplifting than that which went down in 2014. Go click over to see them.

People can change. They can let go of traditions that hurt others without losing anything themselves. It really can happen.