I’ve speculated that a White Sox player probably complained about Drake LaRoche. Jay Jaffe of Sports Illustrated has another explanation which could be even more likely, at least insofar as these things can be measured by the application of Occam’s Razor: White Sox owner Jerry Reinsdorf complained.

That would explain Ken Williams falling on his sword over it. It would likewise explain Chris Sale‘s allegation that Williams tried to blame players for it in that heated team meeting. Williams feeling the heat because he’s not being truthful but not so much heat that he’s gonna rat out his boss. As for why Reinsdorf might have made an issue out of it? Eh, old man billionaire owner doesn’t like to see kids running around and just finally noticed how often Drake LaRoche is hanging out.

Like we’ve said: we don’t know. We can only speculate. That’s not some bad speculating. We’ll eventually know the facts. In the meantime, Reinsdorf issued a statement about all of this which is kind of hilarious: 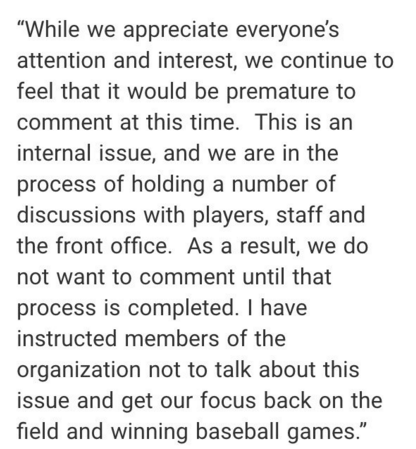 I’m sure he really “appreciates” the interest in this story and it’s not at all a horrifying distraction which unexpectedly blew up way bigger than anyone assumed it would.

Adam LaRoche is going to give a statement about his retirement here shortly. I’d like to think it’ll be a barn-burner, but I’m guessing he’ll take the high road and let Chris Sale scorch the Earth and, um, the barn for him.