We’ve talked a lot about sports and politics not mixing around here. Some of you yell at us to “stick to sports.” For our part, we tell you “sorry, we ain’t sticking to sports,” at least in the way you mean, because in many important ways sports and politics have a lot to do with one other and have a lot to say about one another. We’re always going to note when they intersect in ways that matter.

But one thing I’d hope we can agree on is that who any one baseball player votes for or supports isn’t that big of a deal. Sure, if one of them makes a point of being publicly political it may be interesting to talk about. And, of course, if one comes out and says that the sitting President of the United States is a secret Muslim from Kenya it’s worthy of note and a few laughs. For the most part, however, a ballplayer’s politics are kind of boring. They’re paid to hit and throw baseballs, not hold forth on matters of economics and foreign policy. Most don’t make a big point of being political.

To the extent they are publicly political, ballplayer politics are kind of predictable. There are always risks in generalizing about groups of people, but American ballplayers tend to skew pretty conservative. This should not be surprising. Many come from geographic areas (the south, rural places and well-off exurbs) which skew conservative. Many have personal interests which, based on polling, more conservatives have than liberal people do (hunting, fishing, golf, etc.). Religion is very important to many players and in many clubhouses. They’re all rich and, again, purely on the data available, being religious and being rich are pretty good predictors of being a Republican or a conservative. There has never to my knowledge been comprehensive polling done on the matter, but I’d bet a good deal of money that if you did poll American baseball players you’d find that, as a group, they are more conservative and Republican than the country at large.

Which makes today’s Daily News somewhat amusing. Yankees great and current broadcaster Paul O’Neill was at Donald Trump’s wild Florida press conference last night. He got a shoutout at the presser from The Donald himself and said that he is a big Trump supporter. This is the cover of the Daily News today: 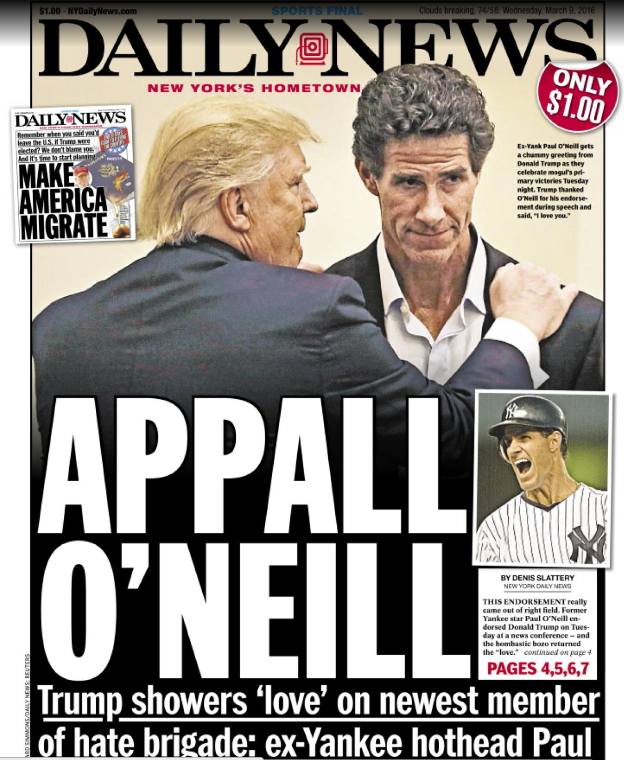 No matter how “appalled” the Daily News is — and, based on Twitter chatter last night, a lot of Yankees fans are appalled as well — this shouldn’t be super shocking. Certainly not the part where O’Neill is a Republican, for reasons stated above. That he’s a Trump supporter as opposed to some other candidate could be because of a personal relationship, the sort of which Trump has with a lot of athletes, especially New York ones. If it’s more policy/political based I’ll give O’Neill the benefit of the doubt and opine that, rather than him being a wide-eyed supporter of the many vile, hateful and mendacious things Trump has said, it’s more of a function of O’Neill simply being less-than-perfectly-informed about them. If you’d like to defend Trump on this count, enjoy the comment section, but don’t expect me to come around to your way of thinking; I’ve talked about Trump at length on my personal blog.

If, on the other hand, O’Neill is in fact on board with every statement and proposal Trump has, well, he’s one guy and you’d probably be shocked what any one guy believes, even if you shouldn’t be. He certainly wouldn’t be alone based on primary results so far. The takeaway here is that we like ballplayers for the stuff they do on the field, not in the voting booth. You probably don’t want to know or think too hard about what they believe about any given topic. For cryin’ out loud, the best player from my favorite team has dabbled in Sandy Hook Truther conspiracies. We can and should still love them for the narrow reasons they came into our lives. See the above stuff about them being paid to hit baseballs. Or, in O’Neill’s case, talk about baseball.

That aside, I’ll say it’s pretty smart for Trump to have O’Neill around.  I have no idea where the election is going, but Trump could still lose in the primaries or he could have the nomination taken away from him via scheming and brokering at the Republican convention. If that happens, he may need advisors versed in handling adversity. Baseball, as has been said, is a game based on failure. If there is any former ballplayer who knows how to react when things don’t go his way or when he feels he was wronged, it’s Paul O’Neill. He could be very useful to Trump and could serve as a role model for grace in failure and defeat: