Grant Brisbee of SB Nation has a great feature up today. He pored over all of the posed photos taken of ballplayers by Getty Images for Photo Day at each spring training facility and categorized them.

There are the funny ones. The ones where pitchers are peeking over their gloves. The ones where coaches looked like they swallowed a bug. The ones with an artsy angle. There are 1,200 dudes on 40-man rosters and only so many ways to pose them, so patterns are understandable. It really is something to see them all together like this, however. The Jack Murphy “Don’t Fear the Reaper” photos are the only ones that really constitute their own category but they’re so disturbing I can’t even contemplate talking about them so just click through to Grant’s story to see them.

I have a special appreciation for the first category Grant mentions: the “throw the baseball in the air” category. Why? Because I posed for one such picture eight years ago. It wasn’t by choice. I was writing my Shysterball Blog at the time and the Columbus Dispatch did a story about sabermetrics and baseball on the internet and stuff. The reporter was a reader of my blog and used me as a sidebar to the story. They sent a photographer to my office for the piece and took my picture. The photographer saw that I had some baseballs on my desk and demanded that I do a “throw the ball in the air shot.” The result is maybe the single worst picture ever taken of me: 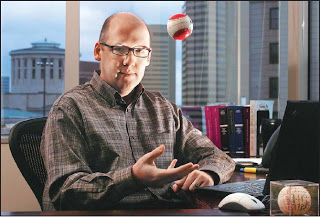 It’s partially the worst because I weighed about 30 pounds more than I do now thanks to stress, being sedentary and engaging in a lot of unhealthy habits. It’s also just a bad picture. The “glow” on my face was fake. Laptops don’t glow like that, especially at 10am when that picture was taken, so the photographer set up a light just out of frame for the fake glow. He had to because the story was headlined “Local fan sees the light with sabermetrics.” Get it?!

The story was also sort of fake too, by the way, as it was presented as a first person narrative. I didn’t write it. The reporter interviewed me and I said those things over the course of a long conversation, but he packaged it as me saying it and left out a lot of stuff I said about how those basic sabermetric observations were not state of the art and that a lot of new stuff was happening so I come off as kind of a simpleton. I suppose it’s OK since it wasn’t inaccurate but I wouldn’t have written it up that way I don’t think. As Lindsey Adler just noted on Twitter, I got “Players Tribune’d.” I guess if it’s good enough for David Ortiz it’s good enough for me.

Bonus fun of that photo session: it was in my law office. Most of the partners I worked for knew I had a baseball blog but they assumed it was for me and six friends. When the local newspaper showed up to take pictures of me and do a story which referenced my baseball writing as something I spent a lot of time on and that thousands of people were reading it sort of turned heads, and not in a good way. I think I was toast at the law firm eventually due to general burnout anyway, but that photo session didn’t help me much. Within a few months I was politely shoved out the door and went to work for the Attorney General’s office. I liked that a lot more, but the following April HBT was launched and I started contributing part time. By that July — a year after this picture was taken — NBC hired me full time and here I am.

The baseball tossing part was dumb. I think I threw that ball up in the air 20 or 30 times with the guy taking multiple frames for each toss. He or an editor had to go over several hundred pictures of a fat, pasty ugly guy to get just the right one and this was the BEST they could do. Poor sods.