The meaninglessness of spring training games has been covered before, but just for the sake of thoroughness, I went over the numbers. The White Sox, last spring, had the eighth highest batting average at .278, the 12th-highest on-base percentage at .322, and the 21st-highest slugging percentage at .402. Above average in two categories, and slightly below average in terms of overall power. That’s actually pretty good. During the regular season, the White Sox ranked 20th in batting average (.250), 27th in on-base percentage (.302), and 29th in slugging percentage (.380). If spring training stats were supposedly any indicator, they didn’t do a very good job.

Here’s what the correlations look like for the triple-slash stats for all 30 teams last season between spring training and the regular season: 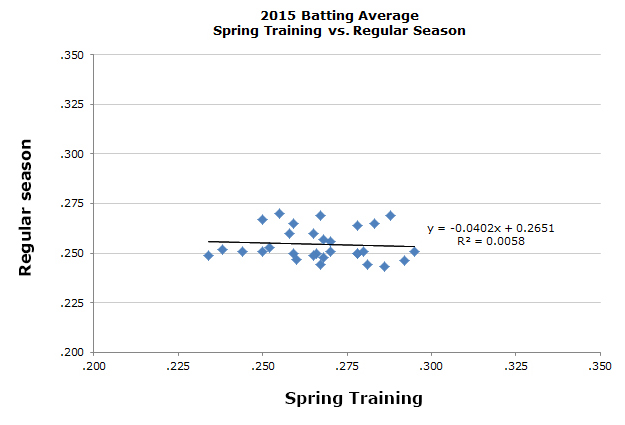 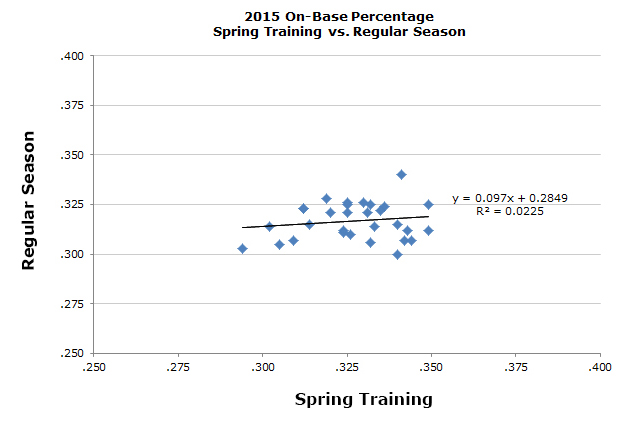 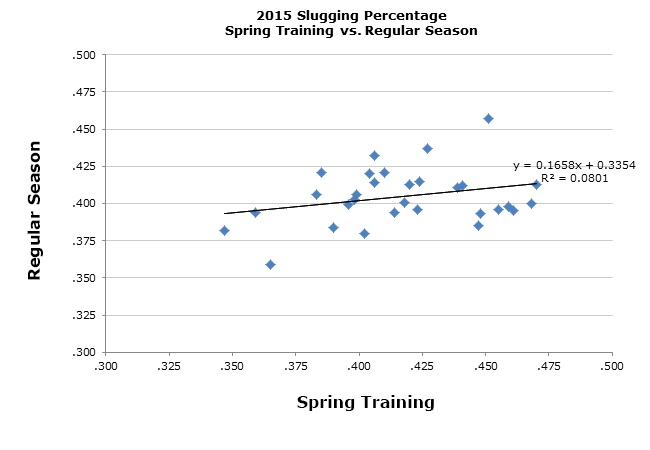 The r-square shows how much of the information can be explained by the particular statistic in question. The value can range from zero to one. Zero means that none of the variability in the data around the mean can be explained by our stat, while one means that all of it can be explained. Our r-square for batting average is 0.0058, 0.225 for on-base percentage, and 0.0801 for slugging percentage. These are not strong correlations at all, and are almost surely due to simple statistical fluctuation.

For the most thorough analysis, one would want to group these results for many years — ideally, as far back as the information is available. Those studies have indeed been done and any correlations have been weak at best. FanGraphs’ Mike Podhorzer, for example, found that strikeout rate and walk rate for pitchers have a bit of importance. Five Thirty-Eight’s Neil Paine found that a strong spring “should affect our predictions for a player’s regular-season production, but only slightly, and only after a particularly strong or weak performance.” Team-wide correlations are even weaker.

Why is this? The most obvious reason is that the playing time distribution during the spring does not match up with regular season playing time. Younger players are given a larger share, while veteran players are used much less often. Michael Conforto might have a strong spring, but particularly for the first half of it, he will be facing pitchers who haven’t quite hit their groove yet and a lot of untested minor league talent. Hitters, often, will focus on specific results like hitting a ground ball to the right side to move a runner over. This isn’t the case for the lion’s share of his regular season cuts.

Sample size has a huge effect on this as well. Billy Burns led all spring hitters with 83 at-bats last year, which is less than one-sixth of a full season’s worth of AB’s. Imagine you’re trying to get as many tails as you can with coin flips. You’re much more likely to get three or four tails with four coin flips than you are to get proportionally as many (75-100 percent) with 100 coin flips. You are more likely to experience outlier results with a smaller sample size. For similar reasons, this is why hitting streaks or slumps are not particularly illuminating.

Ventura is searching for answers as to why his team hit so poorly last season. With a nod to Occam’s Razor, it’s likely just that his team wasn’t particularly talented in the hitting department. The additions of Todd Frazier, Alex Avila, and Brett Lawrie will hopefully address that concern going forward.