The Pirates have had a LOT of different uniforms in the past. They’ve worn vests. They’ve looked like bumblebees. They’ve worn blue sleeves. They’ve had pirate heads on their jerseys. Since the 40s they’ve always gone back to their classic look, but they have experimented an awful lot over the years.

They’re doing something new this year. Or, rather, something old. As a home alternate they’re going with the We Are Family-era yellow and black with a striped hat look: 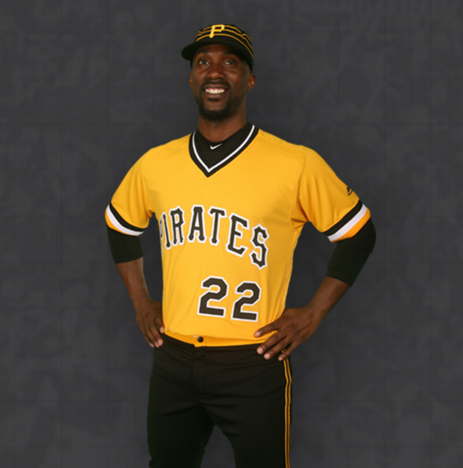 Those are from 1979 (they actually wore them off-and-on from 1977 through 1984) and will be for Sunday home games. If you want to be picky — and with uniforms I sometimes am — you can note that that ensemble was always a road look for Pittsburgh, not a home look, but I suppose we’ll all survive somehow.

I have always had mixed feelings about the Parker/Stargell-era duds in Pittsburgh. They had so, so many different looks back then. This combo is probably the best of the lot. Some of them — notably the pinstripes — were not good at all. I’m glad that if they’re going back to that era, they went with these.