One of the more amusing things to spin out of the Super Bowl were Peyton Manning’s little Budweiser endorsements in his postgame interviews. It was hilarious, really, to see him shoehorn in references to going and cracking a crisp cool Budweiser multiple times. It was more hilarious when a Budweiser representative tweeted that Manning was not paid to do that. Of course, Manning owns an interest in alcohol distributorships so talking about The King of Beers was in his best financial interest all the same.

After that happened people asked whether or not Manning would face discipline about this from the NFL, as players are not allowed to endorse alcoholic beverages. This seemed crazy to me. I had no idea that they were actually banned from doing so. Then I realized that, huh, I can’t for the life of me remember seeing beer commercials with active athletes, so I guess maybe it’s not so crazy. Ken Rosenthal later tweeted that Major League Baseball has a similar ban in place. No alcohol endorsements for ballplayers.

I mean, I can fully anticipate why the leagues would say athletes can’t do it. Think of the children! Role models! Messages about fitness! All that jazz. I suspect a more significant reason is that the leagues and their partners — mostly Anheuser-Busch/InBev — would prefer not to allow high-profile athletes to shill for a competitor. How bad would it look for Alex Rodriguez to do spots for Arrogant Bastard Ale when there are Budweiser signs hanging in 81% of the league’s ballparks? Actually, such ads would look WONDERFUL, but you know what I mean here.

That aside, it does strike me as crazy hypocritical that the leagues can rake in as much as they do from these companies while prohibiting players from getting in on the action. If it is kids they’re worried about, how can they deny that they endorse beer to children every bit as effectively and possibly more so than any one athlete can by virtue of putting it alongside the brands that are the NFL and MLB? Personally I don’t put much stock in a think-of-the-children argument when it comes to beer — it’s everywhere already and everyone does a good job of pushing the “drink responsibly” message — but if those are the leagues’ terms, they probably need to ask themselves how much of a distinction any one athlete and the entire league endorsing this stuff really is.

That aside, sports and beer — often sponsored by active players — have a long, long history together: 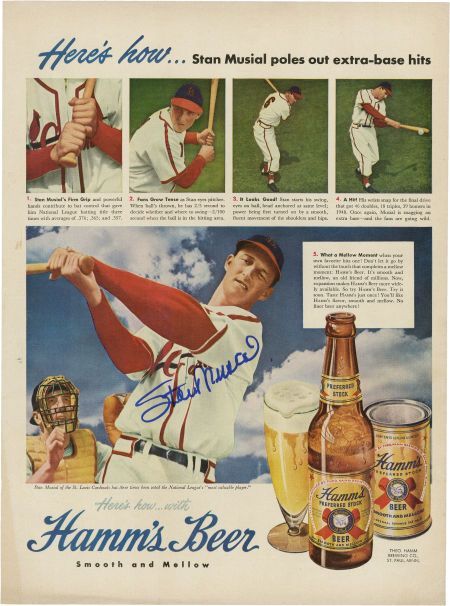 And the picture at the top of this post certainly shows us that Major League Baseball has no issues whatsoever in having its players endorse Budweiser in a practical sense.

Why can’t they get paid for doing it?