I am not the first and will not be the last person to make a “Spaceballs” reference regarding this development. But I’d get fined $250 by the “80s kids” Committee if I didn’t use that headline, so there we are.

Anyway, I give you the Orix Buffaloes:

These are real life jerseys the Orix Buffaloes will wear in real life games in 2016. pic.twitter.com/NPRkSYcz3L

I am finding myself . . . strangely not hating these? Like, I dunno, maybe they wouldn’t be nice to see all the time and maybe they’d wear thin after even one inning in a real game, but I do applaud the outside-the-box thinking. There was a time when teams thought outside the box with respect to uniform designs. Before the orthodoxy of such things was truly established. The early 1900s Tigers had pockets on their jerseys. There were a few years where the teams that won the World Series had “World’s Champions” written on them. These guys almost never came up with good uniforms when they did that sort of thing, but it was fun to see them try.

Like these from the Giants, who beat the Buffaloes to the plaid punch by a century: 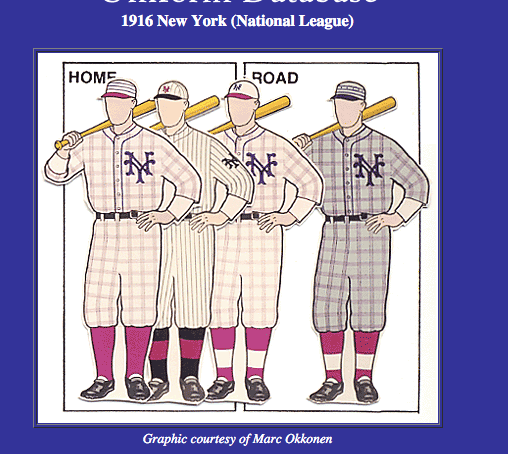 Great? Nah. They only did it for a year. But A for effort, right?