When Astroturf debuted in Houston, it was still limited to the outfield and the portions of the infield where grass had always been in major league ballparks.

But in 1970, with the opening of Riverfront Stadium in Cincinnati, someone realized that some efficiencies could be achieved (i.e. money could be saved and changeovers to a football stadium) if the dirt was eliminated between the bases and, instead, sliding pits were installed. Little dirt sections surrounding the bases, but not in the baseline proper. Sliding pits, became the standard in artificial turf ballparks from then on. Eventually, of course, artificial turf in baseball stadiums started to disappear to where, as of now, only the Blue Jays and Rays play on the fake grass.

The Rays, however, got rid of the sliding pits 15 years ago and have played with a full dirt infield for most of their existence. The Blue Jays, however, still sharing their ballpark with football teams and other events, have kept their sliding pits. That is, until this year. They announced yesterday that a full dirt infield will be installed starting next week and will be in place for the 2016 season: 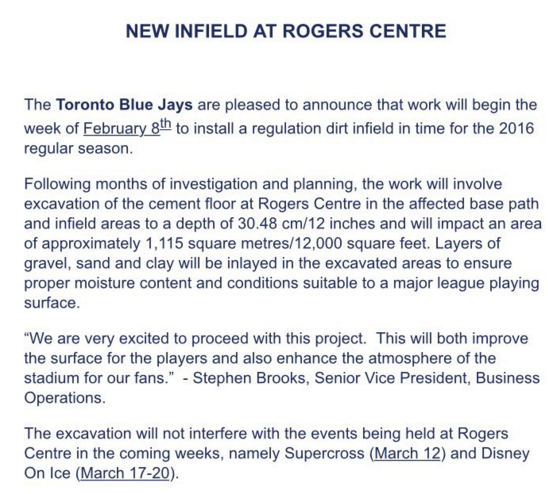 This marks the first time since June of 1970, when the Reds left Crosley Field for Riverfront, that there are no sliding pits in baseball. Eventually, if the Jays can figure out the logistics of their long-discussed conversion to a grass infield and if the Rays can ever figure out how to build a new park, the era of artificial turf will be completely over.