East coast media elites love to tell Real America what’s right and what’s wrong and what they think and what they don’t. They set the trends and rule the markets and act like they’re the only place where it’s ever snowed. It’s highly annoying, frankly.

One of the fancy-schmancy east coast media outlets is now even pretending to have say over what is and what isn’t the Midwest (a/k/a “The Land of Righteousness and Purity as Ordained by God Almighty Himself”). I’m talking Vox, whose very name sounds all snobby what with it’s school-taught Latin malarkey.

Vox has a post up in which they ask people to define what is and what is not the Midwest, under the pretense that it is at all controversial. Go pretend to know what you’re talking about when it comes to the Midwest here.

Wait, I’ll save you the trouble. This is the Midwest. There can be no real debate about it: 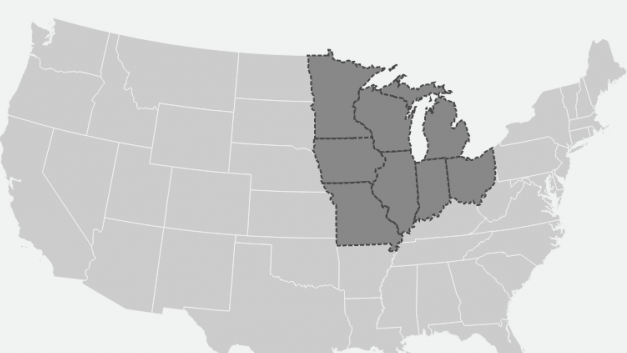 Oh, OK, I’ll maybe grant some mild argument about the Dakotas, Kansas and Nebraska. I know a lot of people there say they’re part of the Midwest, but I think they’re really in The Great Plains. I’ll also note that Missouri is really tough to categorize in that different parts of the state are very different from one another, but on the whole I’ll give it Midwestern status. The rest are no-brainers of course. If your state had a college in the Big Ten prior to Penn State joining, your state is in the Midwest.

In discussing this on Twitter, some people have made some pretty audacious claims. Such as the one in which Michigan and Ohio are allegedly not Midwestern states. Ha!  I have lived on this Earth for 42 years. For 33 of them — depending on how you count college years — I have lived in either Michigan or Ohio. In light of that, I think I’m pretty qualified to say what those places are and, by gum, they ARE in the Midwest. If you claim otherwise, I’d ask you to tell me what region they actually belong to. And no, “rust belt” is not a region. That’s a term network news anchors made up to slag on depressed areas in the 1970s. Either way, if you honestly think Michigan and Ohio are not part of the Midwest you’re so deluded I’d ask you to consult a physician so that you may be put on medication and/or be confined to a long-term treatment facility.

There are other people who say things like “how can any of these places be anything-“west” given that they’re leaning sort of eastern/northern!” To that I say go read a history book or look at an old map, with an emphasis on terms like “Western Reserve,” “Northwest Territories” and the “Northwest Ordinance of 1787.” The world didn’t begin in the 20th century, Bunky. There is history and heritage at stake here.

There’s nothing wrong with being wrong, you guys. That’s how you learn.