We’re a few short days away from 2016 so it’s a good time to look back at the top 25 baseball stories of 2015. Some of them took place on the field, some of them off the field and some of them were creatures of social media, fan chatter and the like. No matter where the story broke, however, these were the stories baseball fans were talking about most this past year.

On October 1, the Yankees beat the Boston Red Sox 4-1 in the season’s 159th game. That win clinched a playoff spot for New York and, as has become custom in Major League Baseball, the champagne flowed in the Yankees’ clubhouse.

The most notable celebrant? This guy: 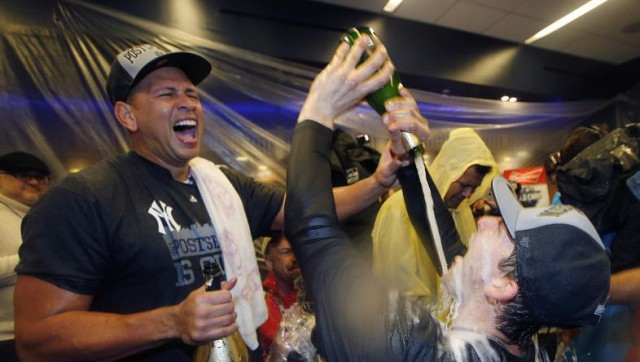 As recently as seven months before this, no sports book in Las Vegas would’ve given you odds that such a scene would have unfolded. Indeed, less than a year previously Alex Rodriguez was living in exile, suspended from baseball due to his involvement in the Biogenesis scandal. The Yankees seemed to all but have cut bait on A-Rod, trading for Chase Headley and naming him their starting third baseman. Carlos Beltran was seen as the Yankees’ DH. While Rodriguez was still under contract with the Yankees, he had to come to spring training and compete for a roster spot. There were no guarantees in Rodriguez’s future outside of the fact that he’d be getting a paycheck signed by a Steinbrenner.

How about two years prior? That was when A-Rod wound down the 2013 season on borrowed time, having missed half of it with injury and having the rest of the summer dominated by ugly revelations of his drug use, acrimonious legal proceedings and toxic accusations between him, the league and his employer. That’s when his season-long suspension was issued and then upheld. At that time many claimed that he’d never play baseball again, let alone play for the Yankees. Let alone play well for the Yankees, let alone lead them to the postseason at the age of 40.

But he made the team. And he played well. And he helped lead them to the postseason. I’m still surprised it happened as I write it at this very moment, even having witnessed it. Having witnessed a 40-year-old player who had missed an entire year and whose previous output was aided by performance enhancing drugs come back to the game and put up a line of .250/.356/.486 (an OPS+ of 131) with 33 homers and 86 RBI. Maybe the most amazing part was that he played in 151 games. Rodriguez hadn’t done that since his MVP season in 2007.

The fans were always going to come back to him if he produced. That’s the one thing the commentators never got right when it came to the A-Rod story. While they literally compared him to mass murderers and tried to outdo one another in just how hot their A-Rod takes could be, the fans’ view of him was always pretty straightforward: if he was helping the Yankees win, go-A-Rod! If he was not, the guy was a bum. Note: this is how almost all players are treated by almost all fans. The extremes of those two reactions were intensified by the amount of money A-Rod made — and yes, A-Rod was always laughed at a good bit due to his various antics — but for the most part, he was treated no different than any other player by Yankees fans.

Yankees management was another thing. It was complicated. They didn’t like him embarrassing the club or having him attack them and their employees, which he did. They certainly didn’t like paying him. Once it became clear that they had no choice but to pay him they figured they’d get as much baseball out of him as they could. Things were still icy, however, as the club tried to get out of paying Rodriguez the home run milestone bonuses he was owed under a marketing agreement with the man, even going so far as to go full-Pravda with it, failing to note his statistical accomplishments in daily media notes. While A-Rod started the season well and while it appeared that, lo and behold, the Yankees had their superstar back, it seemed like only a matter of time before A-Rod and the Yankees would be at war again. You could almost see the tabloid writers’ mouths watering at the prospect.

But then a funny thing happened: A-Rod kept hitting, he and the Yankees reached a compromise on his milestone bonus and the mid-season blowup everyone expected never occurred. By the end of the year the Yankees were honoring Rodriguez in on-the-field ceremonies like he was any other star player.

But the falloff notwithstanding, A-Rod stood in that clubhouse on October 1, wearing a champagne-soaked playoff T-shirt, a cigar in his mouth and had triumphant teammates patting him on the back who accepted his pats back in return. The man so many pundits said was irredeemable was being cast in a bonafide redemption story, whether we wanted such a story or not. The dude even went on to conquer the media which once tried to bury him by serving as a postseason analyst for Fox and getting fantastic reviews for his work.

Did you suspect that would happen? Yeah, suuuuure you did.