There is a Star Wars movie coming out this week. I know, I was shocked too. There’s hardly been any talk about it.

You may have also heard that the folks who own the Star Wars franchise — an obscure, rodent-based corporation with operations in Florida and California — also happen to own ESPN. This provides an opportunity for synergy. A strange bit of synergy in which ESPN’s baseball writers were asked to put together a baseball lineup with Star Wars characters. If you scroll left and right there you see they also did football, basketball, soccer, hockey and even cricket. Disney and ESPN do NOT mess around.

My first impulse was to mock this, but then I remembered that I too work for a sports media company which has a movie studio as a corporate cousin. Universal, to be specific. I’m guessing they’d never ask me to do a baseball lineup as a tie-in for the “Minions” sequel or anything, but on the off chance they do, I don’t want to look like a hypocrite (note: all nine positions will be filled by Minions).

So let’s take this thing in the good spirit it was intended and have some fun with it, shall we? The sort of fun that all good baseball fans like to have: complaining loudly about the roster choices and team building strategy.

Here’s the lineup, written by David Schoenfield and Aimee J. Crawford (you can read their explanations for each choice here): 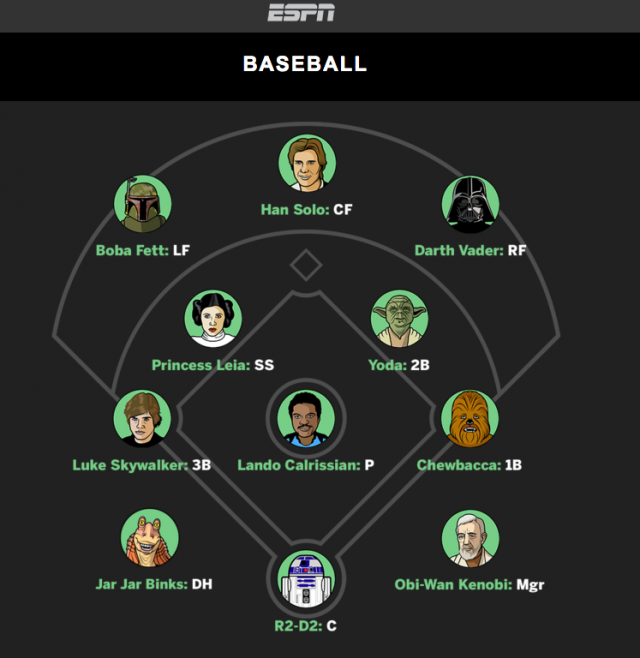 I respect Schoenfield and Crawford’s work, but this is a friggin’ multi-level disaster of a team. For starters:

Then there are a lot of other issues floating around. Putting a father and a son on the same team is a total gimmick (the 1990 Mariners went 77-85). The league’s replay official, Admiral Ackbar, is never going to give our already-challenged outfielders any benefit of the doubt on diving catches. The team’s interpreter is fluent in over six million forms of communication, but he’s also doubling as the analytics department. What’s worse, no one is listening to him, with the center fielder once even yelling at him to never tell him the odds. This is what got Jerry Dipoto fired in Anaheim.

So, really, nice try ESPN. And I hope your little movie does well, Disney. But I’ve got a bad feeling about this hot mess of a baseball team.

(with abundant apologies to David Schoenfield and Aimee J. Crawford)