Major League Baseball released the full written decision of Commissioner Rob Manfred declining Pete Rose’s reinstatement. To say it is damning is to fail to do it justice.

In in Manfred clearly and calmly lays out the procedural posture of Rose’s case, explains the reasons for Rule 21, baseball’s anti-gambling rule, and makes it clear that his decision is not about Rose’s legacy, his Hall of Fame case or anything like that. Rather, that it’s solely about Rose’s risk of violating Rule 21 again if he were to be reinstated. He notes that Rose’s representatives submitted polygraph testing which were either inconclusive or not useful and notes that Major League Baseball conducted a thorough review of Rose’s case, complete with new evidence considered and even psychological testing. Rose, likewise, met personally with Manfred late this summer.

His decision makes it abundantly clear that Rose (a) clearly lied about betting on baseball as a player as opposed to just while a manager; (b) has no apparent understanding of how serious his past violations of Rule 21 were; (c) has done absolutely nothing to change his habits as a person which would suggest he would not violate Rule 21 in the future.

Indeed, Manfred specifically cites the facts that Rose continues, to this day, to gamble on baseball where it is legal and that, while he admitted to a gambling addiction in his 2004 book, Rose has undergone no treatment for it. He is a man who clearly has no grasp that what he did was wrong within the context of baseball and has done nothing to show that, were he to be reinstated tomorrow, he would not gamble on baseball again. In light of this, Manfred reasons, his very limited power to re-consider the mandatory lifetime ban under Rule 21 will not be wasted on Pete Rose.

In the interests of completeness, below is the entire decision from Rob Manfred: 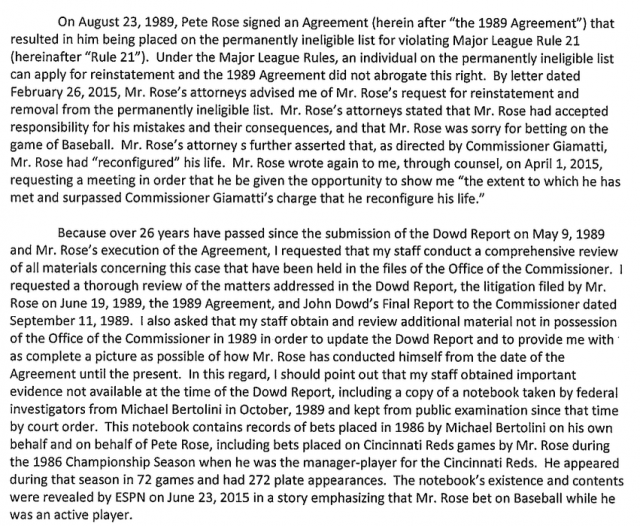 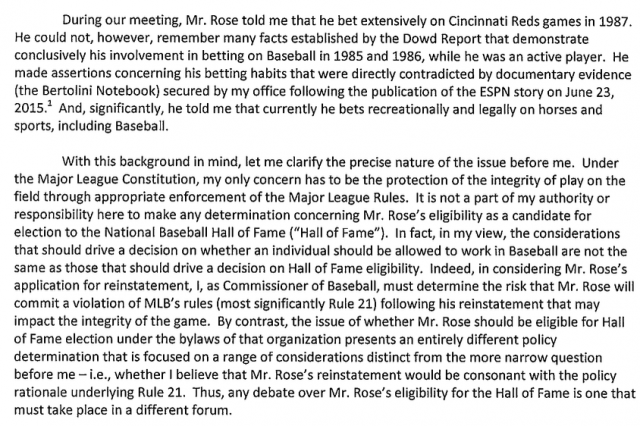 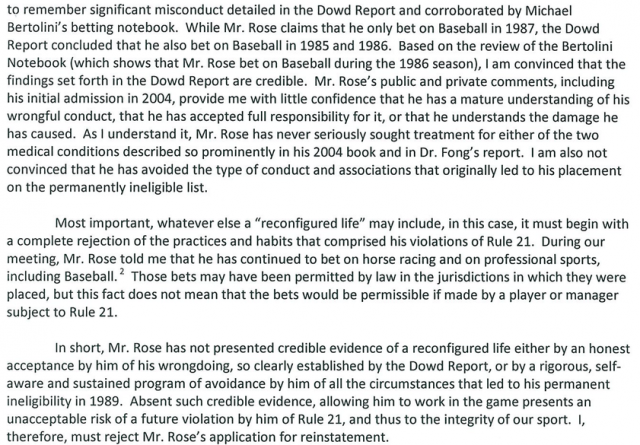