I decided to spend some time today looking at the absolute saddest page on the Internet: the clearance section from the Braves’ store.

There’s all kinds of despair and/or schadenfreude to be found there, depending on your point of view. Jerseys and shirts from players who were just traded or, in some cases, traded a year ago. A Freddie Freeman shirt, the presence of which gave me a heart attack before I realized that it was likely on there because it’s an ugly design, not because he was traded (he’s still a Brave!). A lot of “We Own The East” stuff which is entering its third year in inventory and becomes increasingly comical as time goes on.

But then I found something less funny than it was highly annoying and offensive. Get these “Groupie” shoes: 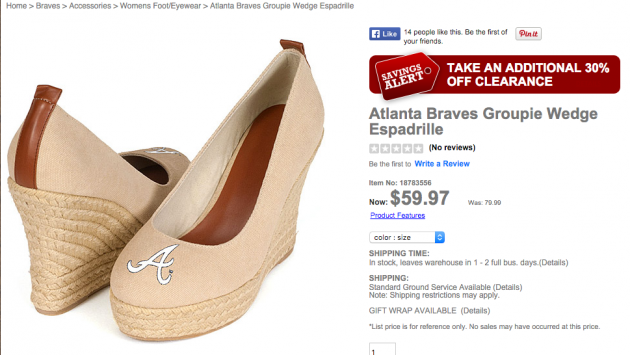 And it’s not just the Braves who have them, by the way. The Tigers, Yankees and some other teams do too, in various styles: 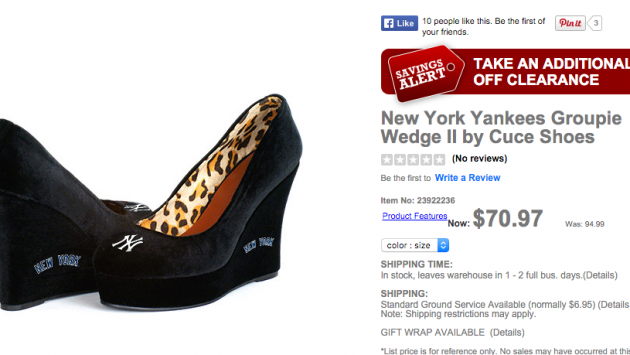 The source of the name appears to be the shoe’s manufacturer, Cuce Shoes (h/t to Maura Johnston). Cuce’s product description reveals that the “Groupie” designation is specifically because it’s team-logo inspired, and that they’re for “anyone looking to make a statement on game day,” and ends with “Let the games begin!”

What games, exactly, it doesn’t say, but Cuce and MLB’s marketing of these shoes seems to be yet the latest example of abject sexism aimed at female sports fans. Along with licensed women’s and girls t-shirts and sports wear with “Talent Scout” written on them — and unlicensed products which label the wearer as a “cleat chaser” — the name for these shoes fit right in with and reinforce the idea that women cannot be serious fans. That they’re only in it for the ballplayer beefcake.

There’s nothing wrong with the shoes themselves, of course. Some women I follow on Twitter said that they’d probably consider wearing them, all things being equal. For some people shoes are fun, baseball fans included. In light of that I can’t help but think that these shoes wouldn’t be on the clearance rack if they were named something that didn’t implicitly call their owners degrading names.

I have been on this Earth for 42 years and have never heard the word “groupie” used in the manner in which they describe there. Indeed, it almost always has a connotation of an almost obsessive fan, more fixated on the player or artist than the performance or game, with derogatory undertones. But hey, you go with that Cuce.