For years, the Orioles and the TV network they own — MASN — have been in battle with the Nationals and Major League Baseball over money. Specifically, the notion of how much money MASN has to pay the Nats for the broadcast rights to Nationals games, which also appear on the network.

This is not historically been a freely negotiated amount. MASN has gotten Nats games on the cheap for years as part of the agreement in which the Orioles allowed the Nats to move into their territory after the franchise abandoned Montreal. The Nats get Washington and MASN — again, owned by Peter Angelos and the Orioles — get to make money on underpriced Nats programming. Per that agreement, the sides were to renegotiate after a set time, with the Nats getting something more like market rates as a result. Those negotiations have not gone well as the market value of TV rights has skyrocketed and MASN either can’t or won’t pay for both Nats and Orioles rights at such high rates.

Last year a three-member MLB arbitration panel decided that the Nationals should receive about $60 million in broadcast rights fees per year from MASN, which is WAY more than MASN and the Orioles want to pay. They thus appealed the ruling, not simply because they don’t like the number, but because they contend that the arbitration itself was gamed.

How? Because of the lawyers involved. The Nationals’ law firm –Proskauer Rose — commonly represents Major League Baseball and its owners as well. It also happened to represent the teams from which the three owners/team officials on the Nats-O’s arbitration panel sat (i.e. Jeff Wilpon of the Mets, Stuart Sternberg of the Rays and Frank Coonelly of the Pirates). The panel ruled against the Orioles and MASN, and the O’s and MASN argued that it did so because the arbitration was biased in favor of MLB and, in turn, the Nats.

Today a New York judge agreed, tossing out the ruling and excoriating Major League Baseball for an inherently unfair arbitration process, specifically because the same lawyers represented both a party to the arbitration AND the arbitrators themselves: 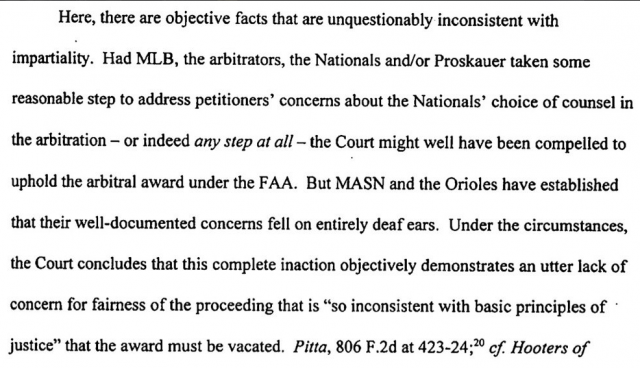 The court had a hard time getting to that point because it could literally not find another example where the entity which ran the arbitration, here MLB, allowed for the arbitrators and one of the parties to have such a blatant conflict of interest. The court seems absolutely gobsmacked, in fact, that MLB didn’t even attempt to do something to remedy this basic unfairness in the process. I’m not sure myself why MLB wouldn’t do that, given that even a first-year lawyer could identify this fundamental flaw in the proceeding and suggest that, maybe, something should be done about it.

But that’s sports league culture for you. A fundamental arrogance at the league/ownership level, which is comprised of people who (a) have been selected to go along to get along with the league simply in order to be allowed into the ownership ranks in the first place; and (b) who don’t have anyone outside of their little club who can ever tell them what to do including, in most cases, courts and Congress. They have spent most of their professional lives and all of their professional sports lives doing exactly what they wanted and answering to no one, so why should they bother to do so here?

Like the NFL and Deflategate, MLB just got its butt handed to it by a judge who was nowhere near as impressed with the league’s handling of internal matters as the league itself is. Now, the league will either have to accept terms from Peter Angelos or go through the entire process again, during which time the Nats will continue to not receive market value for their TV rights and the league’s legal bills go up and up.

And it all could’ve been avoided with some basic, elementary prudence.