The Blue Jays had Royals closer Wade Davis on the ropes in the ninth inning of Game 6 of the ALCS with runners on first and third and nobody out. Dioner Navarro struck out swinging for the first out, but Kevin Pillar stole second base on the play to put the go-ahead run in scoring position. This brought Ben Revere to the plate, who quickly got ahead of Davis in a 2-1 count. Davis then threw a pitch which appeared to be outside, but home plate umpire Jeff Nelson called it a strike. Revere struck out swinging on the very next pitch. Josh Donaldson followed with a ground out to third as Davis escaped and the Royals punched their ticket to the World Series against the Mets.

Here’s a link to the video of Revere’s at-bat. Thanks to Brooks Baseball, take a look at the strike zone from the at-bat in question. As you can see with the called strike marked in red, it looks like Revere as a legitimate gripe. 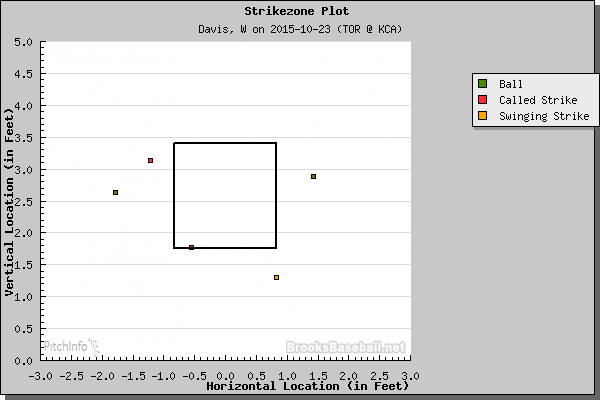 Revere was noticeably angry after the strikeout, taking a bat to a trash can in the dugout. According to Gregor Chisholm of MLB.com, the speedy outfielder was still frustrated about the call after the game:

“It was terrible. It was terrible. It changed the whole game,” Revere said while shaking his head back and forth. “It [would have put] me in a 3-1 count and now he has to throw me a strike. Then, [Nelson] says 2-2, and that puts me in a hole and now I’m battling.

“It was a terrible call. I know these guys are battling, but in that situation, that’s just, you can’t call that. It puts me in a bad situation. It changes the whole game.”

While it’s not getting as much play this morning, a called strike in Navarro’s at-bat (on a 1-1 count) was also outside. It’s unfortunate that the strike zone has to be a storyline after such a great game, but these were big calls. Still, the Blue Jays had plenty of opportunities in Game 6 and failed to capitalize on them. They went 0-for-12 with runners in scoring position.