Rangers reliever Sam Dyson is pretty good. Had a nice year (154 ERA+ in 75 appearances). He likely has a good future working out of bullpens around the league and, as far as any of us know, is a hell of a guy. Maybe a husband. Maybe a father. Good neighbor. Loyal lodge member. Let’s just grant him all of that and more, what with us really not knowing much about him.

Let us also say this about him: last night he was a big whiny baby who could have stood to take a few moments to gather himself and contemplate his shortcomings and general place in the world before spouting off.

You know what happened by now. Bedlam in Toronto following the crazy Russell Martin Shin-Soo Choo interference play. Fans going way over the line into Looneyville, throwing beer cans and the like. Amped up emotions for everyone in Rogers Centre, players included. And then, in the bottom of the seventh, a comeback capped by Dyson serving up a monstrous homer to Jose Bautista that, had it not been for the fine engineers and construction workers who built Rogers Centre, woulda blown the goddamn roof off the place. 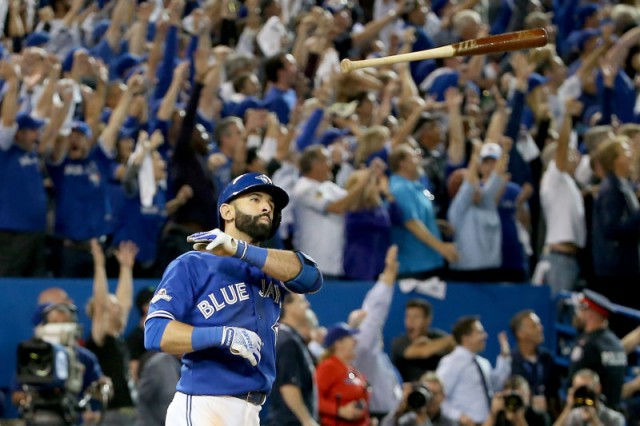 This was A Moment. Actually, this was not just a moment, it was an iconic moment in baseball history, or at the very least soon will be. This was one of the game’s premier sluggers experiencing perhaps his greatest triumph, having shocked his team and nearly 50,000 screaming Blue Jays fans out of the confused funk into which they fell a half inning before, snapped them into an exuberant frenzy and carried them to the next round of the playoffs.

Sam Dyson, however, was not as impressed. He found this to be a good time for an etiquette lecture:

“Jose needs to calm that down, just kind of respect the game a little more. He’s a huge role model for the younger generation that’s coming up playing this game, and I mean he’s doing stuff that kids do in Wiffle ball games and backyard baseball. It shouldn’t be done.”

What a bunch of condescending, patronizing paternalistic nonsense. Who in THE HELL is Sam Dyson to tell Jose Bautista what he “needs” to do? What has Sam Dyson — for as wonderful a person as he may be — ever done or known to give him the right to tell a twelve-year veteran, six-time all-star, team leader and national icon — to two or three nations at this point — what should or shouldn’t be done? And even if he does have any standing whatsoever to lecture Bautista, which he sure as hell does not, how dare he offer up that most mindless, loaded of cliches: “respect the game?”

Bautista did not choreograph some elaborate touchdown dance here. He did not set out to insult the manliness or integrity of Sam Dyson or the Texas Rangers. He had just hit the second biggest home run in Toronto Blue Jays history and, for anyone younger than, say, 25, the biggest in living memory. Most definitely the biggest moment of his professional life. If you are the sort of person who thinks that such a thing cannot be celebrated, you should just give up trying to find happiness in life, consult an actuary about exactly how much time you have left until you die and optimize your investments accordingly. And please, as you do so, be sure your door is closed and your curtains are drawn because the very sight of such a joyless figure as yourself will bring the rest of humanity down.

Pressure + Triumph = Exuberance. If you find that equation troublesome or the concept behind it difficult to grok, you have challenges far beyond trying to get major league hitters out. If you think that some Kafkaesque, self-contradictory, thought and emotion-policing set of “game-respecting” rituals take precedence over it, you’re missing the very point of sports, entertainment and, maybe, even the concept of joy itself.

If such a set of beliefs is required for you to Respect The Game, find a different game. The rest of us will be over here marveling at one of the most exciting baseball moments we’ve ever experienced.