Major League Baseball just released the umpire assignments for the Wild Card Game and the Division Series. As always, the basis for these assignments is a proprietary, scientific calculation undertaken by Major League Baseball, mixing in (a) skill; (b) seniority; and (c) trolling of baseball bloggers who, unlike 99% of the rest of the world actually know the names and track records of various umpires and who are easily riled.

Which is to say that, while we have no Joe West in the early playoff rounds this year — too obvious, perhaps? — we do get an Angel Hernandez.

Here are the assignments. The asterisks represent the crew chief of each unit. Guys with little up arrows next to their names are regular season crew chiefs in their own right. Print this out and keep it near your television so you know who to yell about before the broadcasters tell you who to yell at: 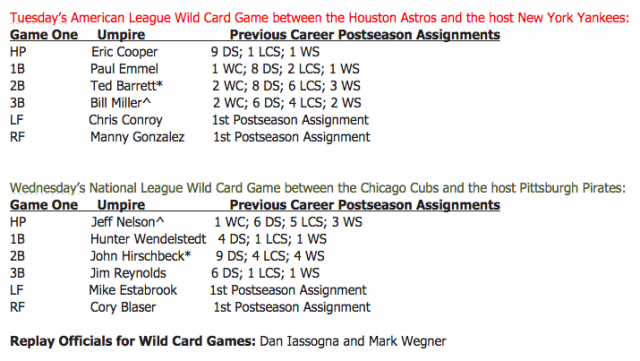