Every year the playoff schedule is announced, every year people complain. And it’s understandable why they do. After six months of games starting at around 7pm — bam! — the playoffs come and you’re either staying up late or tuning in early to watch your local nine.

Of course, the reason for this is that Major League Baseball has two fundamental problems to deal with when the playoffs come around (a) the country is big; and (b) baseball is local and two-thirds and more of the fans don’t have a local team to root for in the playoffs. As such, baseball has to make a schedule that somehow deals with teams — like the Mets and Dodgers — who have big time differences between their home fan bases while trying to rope in as many national viewers as possible.

This means compromises and weirdness like, say, the first couple of Mets-Dodgers games starting after 9pm Eastern time on Friday and Saturday. Or the Texas Rangers starting a game at what, back home in Texas, will be 11:45AM. Which, admittedly, aren’t great start times, but do we expect Dodgers fans in L.A. to fight Friday rush hour traffic and be home in time to watch a game featuring the local team any earlier than 6pm? Seems like a tall order.

Anyway, the early round schedule was just released and you can see it below. If you are so inclined you can find all manner of inconveniences here. Sure, if you don’t have a job — or if being online and watching baseball all day is your job — Friday’s back-to-back-to-back-to-back playoff games are pretty sweet. But otherwise, just plan accordingly and do the best you can.

And remember: no one gives a rip about these schedule issues about ten minutes after the games start: 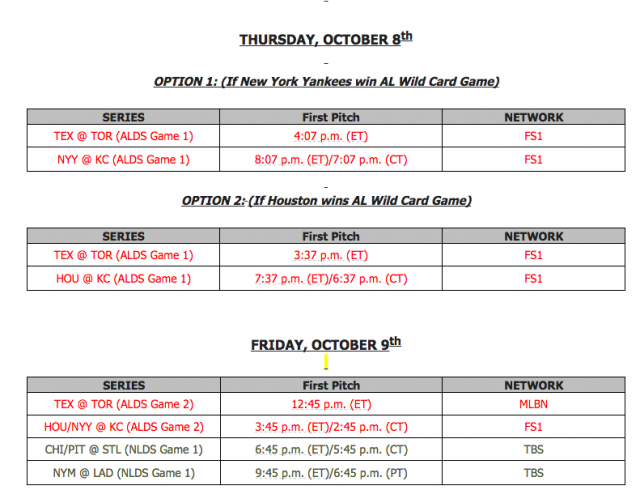